While it seems that here in the U.S. the Q2 program is on the wane, it appears that in jolly olde England excitement for the programme has never been higher.

Over in Coventry, England, a few years back, Don Johnson got the "hots" for the Q2 design about the same time as we were all doing the same. Don was an experienced flyer. He trained in Africa with the RAF, flying Spitfires and Hurricanes and then served in Malaysia during the closing stages of WWII. He has flown continually as a private pilot since leaving the RAF. Don's excitement for flight was wrapped around the Q2 design and he jumped in with everything he had, not only by ordering a kit but also by signing on as the licensed distributor for the Quickie and Q2 for the whole of Europe. By January of 1984, when we featured a back cover photo of G-OGKN in issue #13, Don was flying the pants off of the first Q2 in Europe. The workmanship inside and out was show quality, a fact that is not done justice by our photos. 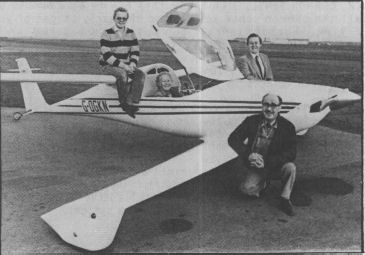 The entire Johnson family got swallowed up in the operation of Quickie Aircraft (Europe) LTD. For example, son Mark followed right in Dad's footsteps not only as a pilot but as a proficient Q2 pilot who could often be found in the skies over the British Isles demonstrating the Q2's attributes in various air displays.

Early in 1985, Mark embarked on a prodigious journey: off Coventry, across the Channel, around the south of France, up through Genoa and on to the final destination, Venice, Italy. And then back. Total cross-country distance was 2360 statute miles covered in 18 hrs. 5 minutes. Average IAS was 145-155 mph with a fuel economy of 48.6 mpg. Mark says, "The thrill of flying that distance in a single-engine aircraft is exhilarating enough. To do it in one that you've helped to build and known since it's built is indescribable. Definitely to be recommended!"

Proud as Dad must've been, I think he felt "one-upped" because you'll be surprised to hear what is happening now. Somehow Don got himself a sponsor and a "gig" to fly his Q2, get this, from Dublin, Ireland to Melbourne, Australia, passing through such garden spots as Frankfurt, Paris, Athens, Cairo, Calcutta, Bangkok, Kuala Lumpur and Darwin - halfway around the world! Check it out on your world atlas, O ye who were hesitant to try a trip to Oshkosh!

Just how he got this sponsorship accomplished is a magic feat worthy of Merlin himself, nevertheless, Don has been terrorizing the English countryside in a Q2 boldly striped all over in green and red with even more bold black lettering that fairly shrieks "FUSILADE" at you from the sides and belly. Fusilade is a chemical herbicide invented 10 years ago by ICI to eradicate annual and perennial grasses (weeds) growing amongst food crops.

1986 is British Industry Year and ICI, Imperial Chemical Industries, is celebrating its 60th year. During its first year of business, way back in 1926, it just so happens that pilot Alan Cobham made a historic flight from Rochester in Kent to Australia to promote global air transport. He flew a De Havilland DH50 single engine biplane converted with floats into a seaplane for much of the journey. In 1986 the ICI Quickie aircraft will attempt to re-create Cobham's epic journey by flying a similar route that varies only to avoid water landings.

Don Johnson will be paired in the cockpit with Gerald Hackemer, a senior Planning Officer with the Plant Protection Division of ICI (with rank go its privileges) and a squadron commander in the RAF Volunteer Reserve.

A wag once wrote a bumper sticker that went "It takes leather balls to play rugby!" I wonder what that same wag would say about this trip? Alan Cobham was knighted on return from his trip. May we hope the same may be said of intrepid Q2 builder/pilot Don Johnson?

The fun starts September 19th. Godspeed, Don, and wag a wing at Dick and Jeanna who should be in the air at the same time.

You can order a PDF or printed copy of QuickTalk #29 by using the Q-talk Back Issue Order Page.