1. Canopy lip: instead of making the lip and removing foam, gray tape the forward edge of canopy and 5-Minute it in place, making sure there is about 1/8" drop in forward lip to leave room for the canopy seal. Turn the fuselage upside down, sand area to be glassed. Use Cut-Rite waxed paper laid out in a semi-circle to make up for the 4 BID lip. When made up, trim off excess waxed paper. Now place it in position. Let cure. Perfect fit, right? 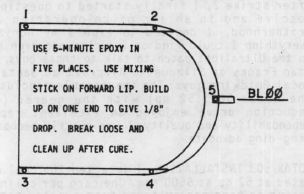 2. Electric trim circuit: when both switches are normal, motor is grounded on both sides. When limit switch is open, motor will run slightly slower due to .75 volt drop in diode. This is a return path for reversing motor. Use diodes big enough for motor current. 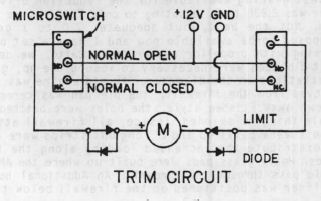 Consider making your tailspring removable - it's a real pain to fix if it is built into the airplane and you break it.

4130 steel tubing with I.D. large enough to accept a tailspring with at least twice the number of BID layers recommended by QAC. Rough up the steel tubing very well before you flox and wrap in place. The tailspring takes a beating, so use the additional BID. 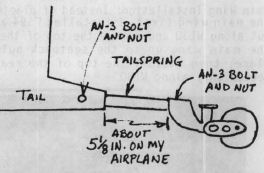 (ED. NOTE: Lenny Padios told me that Revmaster's Eric Shilling used 4130 steel tube like this but of such a diameter that a smaller diameter steel tube could be slid up into it and bolted in place as a replaceable steel tailspring. It has reportedly given no trouble.)

Measure canard distance d. Flip over the fuselage and cut out the section from the firewall to the waterline and back to the distance d. 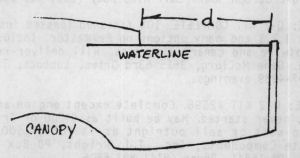 Using a level/flat piece such as plywood or Masonite (3/4"), ensure the "plane" of the cutout is even. Use your center section canard templates to make a jig like so:

The thin boards are fitted into slots cut into the templates to the water lines. The boards and templates are Bondoed together, then flipped upside down (from the drawing) and placed into the cutout on the fuselage. 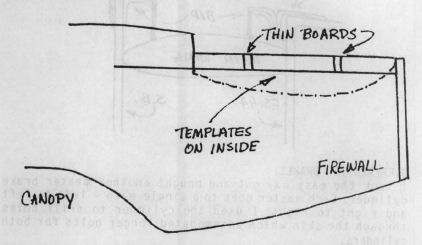 Using a board shorter than the width of the fuselage and longer than the width between the templates, mark where the cutout should be (using the talking numbers you hotwired with) on the inside skin. Cut along these lines. If you are hesitant, cut to NEARLY these lines and trial fit your canard. You'll feel better that this method will work.

For the new canard and the main wing, the procedure is the same but more complicated because the follow-through cores are not symmetrical. For the main wing, I used two new templates which were the average shape of the airfoil between BL00 and BL50: 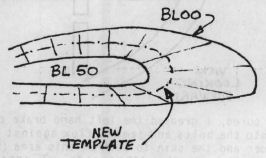 Make the cutout the same way for the main wing and use the template for the cuts. 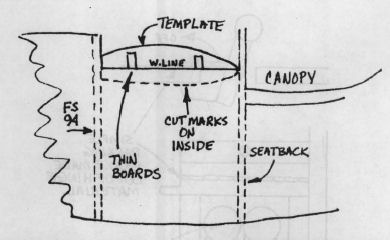 From the cutout for the main wing, I cut off about 2" each side of the turtle deck and used this to securely mount the wing. This helped to lock the wing in place and was easier than cutting the notch as in the plans.

The next step was to drop in the remaining part of the turtle deck. Also, save the cutout from the canard, it can be fitted easily and is of the proper contour for the bottom canard/fuselage juncture. 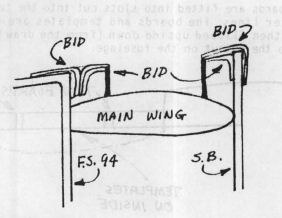 I took the easy way out and bought another master brake cylinder. Each master goes to a single main - left-to-left and right-to-right. I used the cylinder to drill holes through the skin which accommodated longer bolts for both cylinders. 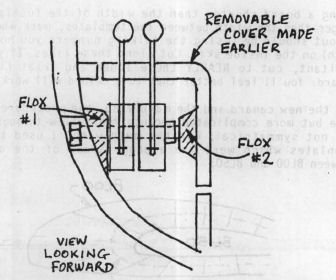 Once this cured, I greased the left hand brake cylinder and slid it onto the bolts and jammed flox against the side of the cylinder and the skin to stiffen this area (flox #1). To provide support on the other side, I installed both cylinders and bolted them in place. I greased the nuts and flox formed the removable door to fit over the nuts (flox #2). I RECOMMEND ACCESS DOORS! 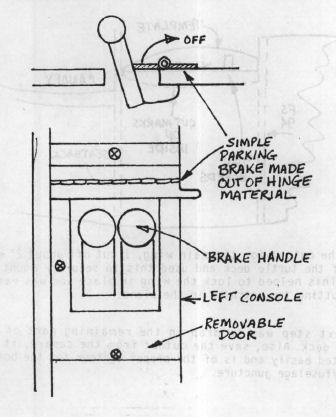 I haven't had to use dual brakes yet to get me out of directional control or weathervaning trouble on the ground. They are touchy and take a while to get used to, but I wouldn't trade them for the old single pull system.

My new canard was measured for flex mounted on a complete airframe, no engine or fuel. Placing 130 lbs. on the wing flexed it 0.6" and 250 lbs. flexed it 1.2". I estimate that with fuel, people, engine etc. it will flex 3" downward. Tires accounted for about 29% of the flex.

You can order a PDF or printed copy of QuickTalk #24 by using the Q-talk Back Issue Order Page.