Heed Revmasters advice and turn your engine over frequently during storage.

When building the LS mod canard, I find that it is much easier to mount the rudder pedals PRIOR to mounting the canard to the fuselage. Nicer to work in the open than squirming around inside tight quarters.

ED. NOTE: At a recent air show, Bob told me of a DUPONT primer filler similar to Feather Fill that he liked very much but now I can't find the notes I took. Anyone else trying it?

2. For simple, light smooth, cheap bearings: Bronze, split ring, Teflon-lined bearings can be found for all tube O.D.'s on the Q-2. These work great to reduce friction at phenolic bearings or for final bearing line up. If you somehow got misaligned bearings or bored one out a bit too much - pot one of these in place with flox. Cost $1-2 each, weighs 1/2 oz. They can be found in bearing specialty shops. Expect to do some minor touch up for burrs at the split line.

(ED. NOTE: This one got separated from its contributor's name:):

My airplane has evolved quite a bit since first flight in Sept. '83 and so have my skills as a Q-2 pilot. I am completely at ease flying the plane in all normal wind conditions using runways just under 2500'. Once I was sure the plane couldn't land in less than 3500' without a little luck and sweaty palms. Things are different now. Probably the most important factors influencing the airplane's performance and my attitude are the addition of vortex generators described by Scott Swing and a cautious approach to self-taught flying technique.

An experienced instructor in a Q-2 trainer could quickly and safely teach everything I've learned and also allow the builder to compare his ship to the trainer. Not all Q-2's fly the same, yet I think they should. One step toward this goal is knowing what to expect from each new airplane and correcting the discrepancies.

My airplane has always been difficult to land because of unpredictable flare characteristics. No two landings were exactly the same no matter what technique I used. It was extremely frustrating and there was doubt I would ever be comfortable in a crosswind. The vortex generators (VG's) seem to have transformed my landings into a predictable event that allows me to concentrate on the rollout. I still use plenty of fast work to keep it going straight, plus I've learned to use just the right amount of aileron. My crosswind approach is made crabbing down to 5-10' AGL where I align with the runway and begin to flare. Holding it off with increasing backpressure, I correct for wind drift in the usual way with aileron and rudder. Touchdown happens at nearly full aft stick followed sometimes with a small hop. A little bouncing has been no problem as long as the stick remains all the way back. There's nothing new here, just typical taildragger doctrine.

TAS at 3000' with vortex generators is now 179 mph, down from 182 and I actually don't notice the difference at cruise. My airplane had a divergent Dutch roll associated with pitch bucking that was eliminated by the VG's. I can't report on improvements in the rain yet.

To make and install the VG's, I used hobby shop white styrene plastic .02" thick and Pacer Tech gap-filling cyanoacrylate adhesive. Lexan plastic was recommended by QAC but was unavailable in my area. I cut the plastic sheet into approximately 120 right triangles and sanded a slight contour into the 1" side to match the canard surface.

Placement of the pieces is important with the points forward, upright, and set on a span wise line drawn at 50% of the wing chord. Orient the triangles at 25 degrees relative to the slipstream (the slipstream isn't necessarily the same as a butt line). I determined the actual slipstream at 2 points by taping 12" strings of yarn on the wing and flying the plane. Space the triangles one inch between converging points and tails.

I spent the whole day on this project, but it was well worth the effort.

During the last year my airplane has required only normal maintenance. The engine has been trouble free except for a small oil leak and loose oil cooler at 60 hrs. I don't recommend rivets for oil cooler attachment because they can't be tightened or removed easily.

Revmaster Aviation has been good to me, providing knowledgeable answers to my questions. They have an updated service manual that is well organized and more complete than my 1981 manual and I think it is worth obtaining.

Overall, my Q-2 provides fun, economical flying and fast transportation. I'm convinced that most problems reported with the Q-2 can be overcome through a combination of refinements to airframe and pilot skill, and patience.

It's time for me to contribute to all of you who, through your letters and helpful comments, have made my project easier to complete and successfully fly. My Q-200, N124DJ flew for the first time on Sept. 2, 1984 from Keene, NH.

First flight is not an easy thing to accomplish. My first effort to get airborne in Aug. was not successful: at about 70 mph the tail started to break ground before the canard and I had the feeling the nose would not lift short of a much higher airspeed. I taxied back and began looking for probable causes. A second weight and balance indicated I was on the forward edge of the envelope so I added 15 pounds to the tail as far aft as possible. This placed me in the center of the envelope.

The second attempt proved successful and I flew for 45 min. up to 3500'. I had some trim problems, especially with pitch control. I found the elevators needed to be trimmed down to maintain level flight. At level cruise (130 mph) the elevators were about 3/4" down and had to be held there with the trim device. Looking at the problem I found the sparrow strainers were not correct (too flat - I had been sent the incorrect template by QAC). I have redone the strainers and now the elevators do not require as much trim to keep them down.

Landing and rollout are probably the most challenging aspect of flying the Q-200. I found it difficult if not impossible to land without bouncing on and often porpoising down the runway on rollout. Several changes helped. I stiffened the tailspring considerably and added dampening springs from the spring to the tailwheel. The major effect is to reduce the bounce of the tail that quickly gets transferred to the canard and then back to the tailspring and on and on. Porpoising can be avoided on a level runway, but be aware that many airports are not that level or smooth (Maybe for a 150, but not for a Q-2).

Next I added an aileron reflexor - a must to have enough pitch for an adequate flare on landing. Perhaps my canard is a bit negative, I believe about 1/2 degree, but within tolerances. The reflexors allow me to have neutral elevators with ailerons reflexed up approximately .4". In this configuration, I have considerable pitch control down to 70 mph IAS and flares are not a problem. However rollouts are still difficult and not as controllable as one would hope for. What's the solution? We are told by QAC that landings will become easier with more practice. This is probably true, but can't be the only solution. By its nature, the plane is not an easy craft to land and roll out; I don't believe many of you who have tried will argue the point. The belly board may be a partial answer and I expect to install one shortly. Increased drag might help in the transition from 70 to 50 mph where instability is at its greatest.

I would like to wish all of you well in your efforts to fly but add caution to approach the process slowly and try to work out problem areas before each flight. It's a continuing learning process, and I would greatly appreciate comments from others who are in the early hours of flight-testing. We've proven the average builder can build the plane, but can most of us fly it successfully? I've now been signed off by the FAA and am roaming the skies of New England. Top speed is 208 CAS and cruise seems to be about 195. Stall is 65-68 as per specs. Fuel consumption at 150-170 mph is about 4 gph. Landings are getting better now that I have about 55 hours.

Installing the canopy: I marked around the canopy with a pin then cut through the outside skin with a hacksaw blade. Using a thickness gauge same as the canopy, the foam was sawed down to receive the canopy. The 1/2 to 1 inch rough-cut lip supported the canopy. If it tended to stick out, a spot of hot glue held it in place. I think this works much better then shimming. 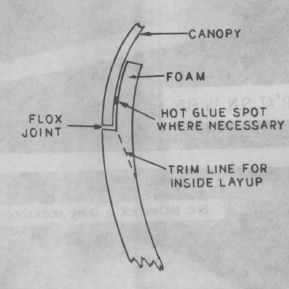 FLASH** Burt Rutan announced as of 7-13-85 he will no longer sell homebuilt aircraft plans, BUT RAF WILL REMAIN OPEN to support current builders. Yippee!! Now he can show those "spam canners" how to can! We'll miss him though we hope to see a bigger Rutan mark on aviation.

MODEL QUICKIE 2: Fuel leaking from a loose sight gauge connection pooled in the belly of the aircraft and entered the canard through an antenna lead provision. The foam structure of the canard was dissolved by the 100LL aviation fuel. The aircraft builder was alerted to the possible incompatibility of foam to gasoline by a Malfunction or Defect Report which was published in Alerts No. 78 dated January 1985. The builder installed drain holes in the belly of his aircraft.

ED. NOTE: One of our builders installed an extra tank in the space above the main tank. It was not properly sealed, and was found to be leaking into the wing and slowly dissolving the STYROFOAM foam core. Could spoil your fun. URETHANE foams will not dissolve, however.

You can order a PDF or printed copy of QuickTalk #22 by using the Q-talk Back Issue Order Page.