Tired of hassling with those solid rivets on your nutplates? Try flush pop rivets from Spruce: BSC-44 at 6 cents each.

Here is a comparison of the cross sections of the QAC and Dragonfly tailsprings to show why the Dragonfly's might be stronger (it's also about $10 cheaper thru Spruce).

1. Be aware that you can get shocked when hotwiring. Don't stand in a puddle in your bare feet and don't unplug the transformer while holding the hotwire, even when set at zero volts.

2. When cutting glass tapes for bonding fuselage, bulkheads, etc. mark the tape center and wet it out on Sarah Wrap. The line aids in keeping the long strips centered.

4. If longerons are not quite bent enough, put in place and spread with a brace across the cockpit. Make sure the longeron ends do not puncture the fuselage skins. I clamped a board on the outside skin to reinforce it until the flox set.

5. Use X-40 foam to match wing and canard foam cores at BL00. Saves complex fitting for proper bevel and anhedral.

6. Use gray tape on leading edge of wing to protect foam from excess running micro and epoxy.

7. Another builder and I used 1/4" masking tape on the wing skin fiberglass cloth pieces as follows: Measure and draw cut line, apply tape over the line then cut down the center of the tape. This results in 1/8" wide tape on the cloth overhang. After placing in position on the wing, trim off tape and complete placement. This will hold cloth in shape while handling it.

8. When turning over the wing, rather than build a complex frame, I made a set of jigs for the lower surface that was already glassed. This was done by measuring the distance from the wing surface to a line level with the highest part at each jig position. 2 inches were added so the wing would end up above the table (fig. 1). This distance was transferred as the new jig height. 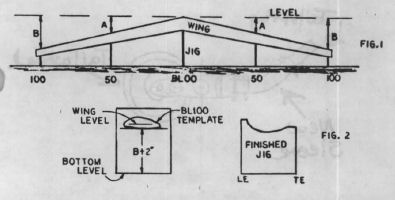 The jig shape was made from the wing templates. 1/4" Masonite was placed in a level position. The bottom of the wing template is put at the measured height +2", level line level, and the lower outline drawn. This is the cut line. Repeat for the other jigs (fig. 2). To check for levelness, place upside down on wing and check bottom for level and correct fit. Before turning wing, run a monofilament line from wing tip to wing tip level lines along shear web. Stretch tight. Mark on the shear web a convenient distance from string to web at each jig position and where the line crosses the shear web edge. Turn wing over and replace jigs with new ones. Adjust or shim jigs until the string distances are what they were before turning (i.e. wing anhedral correct); check level lines on wing tips and continue as per plans. Jigs are also useful to hold wing when glassing wing tip trailing edges.

Before removing completed wing core from jigs, confirm tip level lines and level tip to tip with a water hose level and then Bondo a bulls-eye level at BL00, coupled with one on the fuselage to make fitting the wing to the fuselage much easier.

2. Zolatone paint is about the best I've found for finishing the interior of composite aircraft. I lightly scuffed my Quickie interior with 50 grit before applying it at about 75 psi on the gun. The distance the gun is held from the work makes a difference in the pattern. Many colors are available, not just those that Wicks and AS&S supply. Write or call: Zolatone Process, Inc., 3411 E. 15th, Los Angeles, CA 80013, (213) 269-9231. Their Customer Service Dept. can tell you the nearest dealer (probably an industrial supply co.). Ask the dealer for product info on Zolatone paint and specifically a color listing of their system 40 paint which is what Spruce and Wicks offer. Zolatone is neat stuff - it fills weave nicely and hides tape joints. It is also quite durable and produces a much better looking interior than the "trunk paints" like Krylon.

[ED NOTE: A few more words. I've tried Krylon and Ditzler spray cans of trunk paint. They both tended to cake on in a thick coating that covered inadequately for my taste. My charcoal gray Zolatone covered well, just like primer, and looks like a felt fabric when dried. I applied it with a cheap Sear's gun and 1/2 hp compressor (as I did with Feather Fill and primer but NOT with finish paint) at 40-50 lbs pressure. I also did it in a fit of impatience with a cheap air brush but that was too slow. Later, in an even WORSE fit, I painted it on inside the canopy with a brush! Even then it looked better than Krylon but up close you can tell that the texture is uneven as heavy brush forces break up some of the aggregate particles. I have seen a brushed on Vari-EZ interior that looked quite interesting because the builder broke up the particles on purpose BUT UNIFORMLY. Zolatone comes in fine (which looks like felt) and course (like insides of fiberglass boats) aggregates and I have seen light and dark gray, chocolate, cream, lt. brown, lt. blue, lt. green.]

A good substitute for X-40 pour in place foam is a product called "Mountains in Minutes" 2-part poly foam, which is sold, in hobby shops catering to model train enthusiasts. This foam cures in about 10 minutes at room temperature and is great for joining foam blocks that will later be carved, i.e. wheelpants. Rutan Aircraft Factory has endorsed the use of 2 part pour in place foam for canopy frames on Long-EZ's so it must be OK to use.

[ED. NOTE: Just yesterday I had a BAD experience cutting foam cores for a Vari-EZ builder who had the neatest idea to join his foam blocks with X-40. The joint points COULD have been thinner, but the hotwire started lagging at each joint necessitating a sawing action to help it through and on one core stretching the wire quite a bit from the pull forces we used to get through before burning too much foam. NOT FUN. Also, these canned insulation foams are nice for carving as Norm states but the ones I've used from hardware stores take several hours to cure up before sanding. You'll just have to experiment. Put some between two pieces of scrap styrofoam, let it cure than try to crush this sandwich. You should be impressed.

Another thing about expanding foams: leave "vent" spaces or cutouts for the foam to balloon out of. A Dragonfly builder poured X-40 into a tight wingtip mold which blew apart when this fast curing foam hit room air at the exit hole and cured while the internal foam was still expanding.

You can order a PDF or printed copy of QuickTalk #21 by using the Q-talk Back Issue Order Page.