I have had the distinct opportunity to live amongst the saga of intrepid and fearless aviator/builder Ron Gowan, who in a previous issue related the details of his Q-2 crash on short final while passing through a rain shower. Notably, Ron's aircraft has a C-85 engine, which he mounted well before there were plans available for the Q-200. Ron's a fearless A&P also.

After his first accident in the Atlanta area, Ron was transferred to the Dallas area where he spent several months replacing his canard with the new version, as well as refinishing and repairing other damage. In June he was flying again. Ron was pleased with the improved flight qualities of the carbon spar canard, but felt it had much more "spring" to it during landings. He heard about the tail strengthening mod during his flight test phase and so he laid up about 2 ft of UNI on the dorsal tailcone extending forward from the fin (the actual mod required something like 42 inches of UNI). Except for some difficulties controlling rollout, Ron had a ball flying the pants off his machine in anticipation of a trip to the Oshkosh show. He quickly accumulated the necessary 40 hours and got the sign off from the FAA.

On his very next flight, made in celebration of sign off, "test" pilot Ron Gowan was to perform a dynamic load test of QAC's mods. After a short flight, Ron came in for landing, hit hard and started to bounce. Before he could recover with power, the plane went up in a bounce, lost forward speed and slammed down on the runway. It shed both wheel pants along with about a foot and a half of canard, smashed the cowling, broke the prop and the tailspring as well (naturally). Lo and behold, the tailcone only cracked, and did so only at the forward end of the UNI strengthening layup. The fuselage sustained a couple 10 to 20 inch cracks at the seatback bulkhead and near the trailing edge of the canard joint. The test pilot was unhurt physically.

By the time the plane got back to the hangar, it was discovered that fuel had leaked inside the right canard for a couple of feet, eating out the foam. 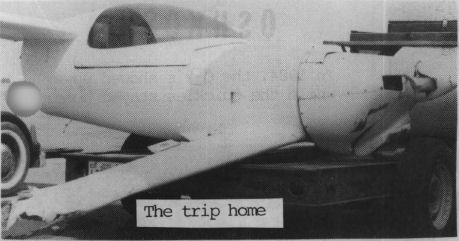 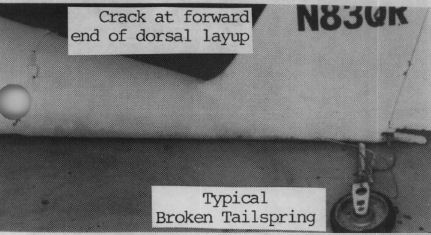 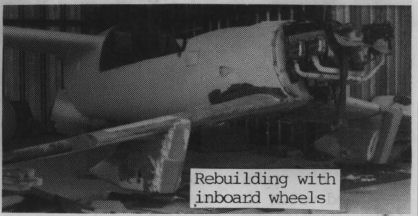 Ron intends to fly this plane again and in fact, already has it well on the way to recovery. We thank Ron for the following lessons:

2. Ron had 40-50 successful landings during his test period. Don't relax.

3. The carbon spar canard is springy. Don't come in fast, hard or both. Be prepared for a quick power recovery.

4. The carbon spar is STRONG; it didn't break at the ends of the stiffeners like the old one has done.

5. The tail strengthening mod DOES carry the stress away from the narrow part of the tailcone where several breaks have occurred.

Finally, test pilot Gowan has moved his wheel pants inboard in an attempt to improve directional control, and he may try a Dragonfly tailspring. This spring is oval shaped and may resist side loads better and thus be less likely to break.

You can order a PDF or printed copy of QuickTalk #17 by using the Q-talk Back Issue Order Page.