Author's note: The preparation of this article was wickedly good fun (and a bit tongue in cheek), although it did steal valuable time that might have been better used in flying ol' Quickie N142WT.

It has recently become transparently clear that there exists a problem of great importance for Quickie, Q2 and Q-200 builders around the world. The problem can be simply stated: When will the QAC Newsletter arrive? What will it say? Furthermore, it suddenly struck the author that the time was ripe for the awesome power of the modern computer to confront and solve this problem. To illustrate the magnitude and importance of this problem, I first offer a few examples from the relevant literature:

ISSUE #3 (Jan. 1979) indicated that a certain Bob Hoover had rolled N77Q in front of a crowd. It seemed clear that rolling instructions would be forthcoming and the next issue was eagerly awaited across the country.

ISSUE #6 (Oct. 1979) notes that QAC has decided to donate N77Q to the EAA museum and build a second Quickie, this one from the plans. We looked forward to updated building times and weights for this new machine.

ISSUE #9 (Jul. 1980) notes that the Vari-Prop gives a 60% increase in climb rate "at high density altitudes" and would hopefully be available by the end of 1980. Not only that, but turbocharging for the Onan is also expected by the end of the year. (Reportedly at this point, many builders asked for airmail and special delivery of their newsletter!)

ISSUE #11 (Jan. 1981) enthuses about a 170 MPH top speed with the turbo Onan. Palpitating hearts (endangering the passing of the flight medical) pervade the Quickie community. The prototype Q2 engages in dynamic stress analysis as a part of prop testing. Gene's heart is also reported to palpitate a bit. (The Q2 price of $8995 begins to move....up!)

ISSUE #12 (Apr. 1981) states that 97 Quickies have reportedly made their first flights. It is hoped that the next newsletter will announce how many Quickies have made SECOND flights.

ISSUE #14 (Oct. 1981) tells us that the Q2 will now come with hydraulic disc brakes as standard equipment. This decision reportedly is coincident with the stationing of reporters at the end of first-flight runways.

ISSUE #16 (Apr. 1982) announces an aileron reflexer system for the Q2. Gradual reduction in bicep training is a suggested plans change.

ISSUE #19 (Jan. 1983) has Quickie owners frothing once again as they discover promises of their own new little engine (Citroen), a NASA supercritical (!) airfoil and an aileron reflexer - but evidently the turbo Onan with Vari-Prop has faded away into the Great Unknown.

With this little historical background, it is clear that the prediction of arrival dates for future QAC newsletters will be of great interest and importance. Thanks to the computer, it has been done!

The figure below shows the computer solution to this problem The input data were derived by assuming that a postmarked date on the 15th of the proper month represents on-time performance. Not that the computer HAS been able to match the past record very well, and therefore we can have considerable confidence in the mathematical model into the future. The ripply curve can be thought of as the CORPORATE BIORHYTHM for QAC. With some trepidation, we note that the future appears to hold deeper valleys and peakier mountain tops. 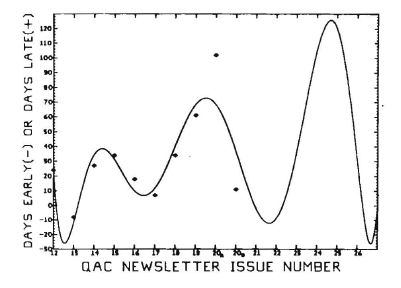 The second part of our task is of even greater interest. When the newsletter finally arrives, WHAT WILL IT SAY? Well, keeping the above data in mind, a little intuition might be in order:

ISSUE #22 (Jan. 1984) will introduce the Quickie QG, a special glider version of the famous Quickie that features lengthened wings and a tow hook in place of the Onan. Trades will be available.

ISSUE #23 (Apr. 1984) will offer the Long-Q2, a special ultra long-range version of the Q2. The Lycoming 0-235 and droppable fuselage blister tanks will give this "ultimate traveling machine" even greater range than its next-hangar competition. A test pilot from QAC will be presenting an air show routine with the prototype at Oshkosh '84. The first package will cost $9999 - but only for a limited time.

ISSUE #24 (Jul.-Oct. 1984) will note that the Citroen engine option is being dropped in favor of a turbocharged Civic engine. An ultra-light ballistic parachute system will be an integral part of this option. Performance specs are very impressive. Also, the Quickie-QG is going to be offered in a powered glider version using a retractable KFM engine.

ISSUE #25 (Jan. 1985) notes that QAC has once again risen successfully to the challenge. The new Q-320, using the proven Lycoming 180-HP engine, is absolutely guaranteed to blast past all other plastic wings in the sky. Fly-by-wire controls, forward-swept wings, maneuver and speed flaps, air-conditioning and powered brakes are just a few of the expected features. Deliveries will begin shortly!