1. (Page 8-1) Enclosed is a photo of my project. I made the fuselage jigs 12" longer than the plans using 5/8" pressed board. The jigs were glued to 2x2's on the ends. The 2x2's were braced by 1x12's cut at 45 degree angles for floor support and attached by lag screws through oversized holes for adjustment. 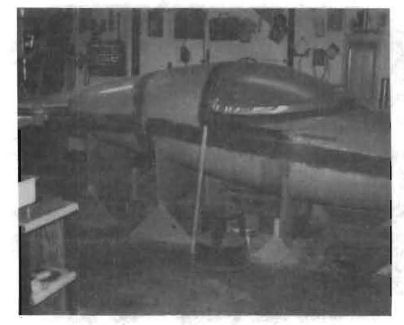 1. (Page 8-1) The plans say that the "fuselage jigging table is APPROXIMATELY level with WL15". By making the table level with WL15, you will be able to use the top of the table for many checks and measurements that would be impossible if it weren't.

2. A way I have found to hold the top fuselage halves to the bottom halves while fitting everything is to make the fuselage jigging from heavy (thick) material (I used 1" plywood) and to screw wood screws into the sides near the fuselage parting lines. Get an old inner tube and cut strip sections from the tube 3/4" to 1" in width. Take two large flat washers and tie one on each end of the tube strip. Put one washer over a screw and stretch the tube over the top of the fuselage. Attach the other washer to the opposite screw to hold the fuselage in place. If you place the screws into the jigs low enough, it won't be necessary to relocate them when you cut the jigs to laminate the fuselage halves.

1. (Page 11-5) I found it much easier to assemble the two wheel halves, the tube and tire before bolting the halves together. Don't catch the tube between the halves.

2. I cut out a rough, undersize opening for the canard. This made mounting the gas tank, header tank and engine brackets much easier than if I had to work down from the top.

3. (Page 9-5) You only need one aileron slot foam core on each side. Select the ones that will best match the wing at the points of attachment.

4. (New Canard) The plans call for 25 and 30 narrow strips of UNI to hold the spars together. Why not cut four keystone-shaped pieces and just wrap them around the spar?

1. (Page 4-2) The template for the phenolic bearing block does not line up with the predrilled holes unless the template for each bearing is cut out and glued onto the block separately.

2. (Page 9-5) The plans are not very clear on positioning the aileron slot cores on the main wing shear web. The controlling factor is to locate the slot core far enough from the fuselage so that the fairing placed between the aileron and the fuselage will be long enough so that a radius may be placed on the bottom of the fairing. This radius should be the same size as the radius on the bottom of the main wing. The inboard edge of my slot cores were located at BL14.75.

3. (Page 9-1) I didn't think that the jigging table extensions in the plans were sufficient support, so I constructed mine as shown below. I used hex head lag screws and glue to attach.

4. (Page 9-3) The 20 BID pads will slide around as they are being laid up, so mark 6" center lines on the wing at SH1. This will allow you to later locate the center of SH1 for drilling.

2. (Page 14-8) The Q2 plans impose a very difficult task in requiring perfect elevator alignment before drilling the last hole for the universal joint. Further, the offset of the stick to elevator push rod imposes different left to right stick forces. The following method has proven successful in equalizing forces and roll inputs as well as providing independent elevator adjustments for correction of wing heavy conditions. Discard the AN271-B8 universal joint. Obtain another Q2CSA8 from QAC and replace CS20 with the Q2CSA8. Spacing between the 'ears' should be about 2.2". Obviously, the 'ears' should be nearly parallel when drilling the elevator torque tube holes. Alternately, you could obtain 4130 steel and Heliarc to the old 4130 CS20 torque tube. The second Q2CSA8 will require a bearing block for support and this can be fabricated from 1/2" phenolic. (See diagram)

Dimensions are approximate and will vary with individual aircraft. Note that the bearing cap MUST be removable to permit elevator dismounting. The 5/8" dia. hole should be drilled after counterboring for the AN3 bolts and after making the cap cut. Clamp the assembly together with the AN3 bolts, then drill the hole. Trial fit the block for smooth elevator action, then flox and glass to the canard shear web and fuselage bottom. Spacing from BL00 will be about the same as CS14. Duplicate the original elevator push rod assembly and install the push rods to opposite sides of the stick using proper spacers and a longer AN3 bolt. The rod end bearings will provide adjustment for any reasonable trim deviation. Connect the trim system to either Q2CSA8 'ear' and trim the other 'ear' 1/2" above the push rod bearing attach hole.

1. The brake pads on my Q2 broke and locked up the wheel. You guessed it...flipped! I'm installing new Rosenhan wheels and brakes. These use Cleveland brake pads.

1. I found by installing two shielded capacitors to the P-leads on the mags I completely eliminated all noise on the normally used radio frequencies. The capacitors were used with the voltage regulator supplied by QAC.

2. I would advise all builders using geared electric starters to insure they operate properly before engine installation. I had to remove my engine to free up the starter because the gear on the starter was binding in the ring gear on the flywheel. The plans don't call for it, but I safety-tied my starter before the installation.

3. Regarding the fuel header gauge in the main panel, I cut the fuel tubing to the required length to pass through the panel and return to the header tank fitting. Cut two pieces of 1/4" aluminum Versatube about 3" long, insert them into the fuel tube to the proper spacing so when bent 90 degrees they will be in the proper locations on the panel. After the aluminum pieces are inserted to their proper places, fill with water and plug both ends. Lay the tube in a straight line and place the whole assembly in a freezer. Let freeze solid. Grab the piece and quickly place in your bench vise to bend the tube 90 degrees. Be sure to protect the tube from being scratched in your vise jaws. Refreeze the tube and repeat the process for the other bend. The frozen water trick will take the place of a proper tube bender. You may wish to delay cutting the holes in the panel until after the gauge is fitted with the aluminum bends to insure an exact fit.

1. (Page 8-4) When installing bulkheads, do not bond the top front fuselage shell to bulkhead 94 and the seatback vertical part. Then when installing the wing, you can cut the entire top off at WL30 from the canopy cutout to the front/rear joint. Next you contour for the wing bottom, set it in place and get it accurately lined up. The bulkheads will be somewhat flexible, so lining them up will be easier. When all is perfect, put on all the tapes below the wing. Then contour the top part of the fuselage to fit and tape it in place. This procedure will eliminate two joints on top of the fuselage, thus making for easier final finishing.

2. (Page 8-4) Another idea is to leave the firewall off as long as possible for access to the front of the cockpit. It sometimes helps, also, to cut out for the canard ahead of time so you can get at things easier through that opening.

1. I've been very pleased with the overall performance of my Revmaster 2100, except for my first attempt at a cold (15-20 degrees) start...It didn't! We've tried something since that seems to work: Fuel valve ON; Throttle just barely cracked; Mixture full rich; Ignition switch OFF (REPEAT OFF!); Pull the prop through by hand 7-10 times in the normal direction; Get back inside; Throttle barely cracked; Mixture still full rich; Ignition switch ON; Start. Ours started pronto at 17 degrees without pre-heating. I re-emphasize, when pulling the prop through to get extra fuel to the engine, make double sure the ignition switch is OFF.

1. (Disc Brakes) Another aircraft builder came by to see what I was doing with disc brakes. He is an automobile racing enthusiast whose attention has turned to airplanes. Upon seeing the standard QAC supplied parts, he commented that the disc itself appears to be 'punched' from a sheet. He proffered a solution to erratic brake problems. Install as per plans. During taxi tests, apply brakes adequately to heat them real well. This will remove internal stress (from the punch process). Then disassemble and have the discs turned in a good shop. Reinstall. This should preclude erratic braking due to warpage. He states this is standard practice on small racing vehicles.