/Brothers Ken and Martin Olson have solved the problem of having a building partner while still keeping it in the family. They write to us from Golden, British Columbia where Ken is a small building contractor and Martin is a Canadian ski instructor. Both gentlemen have about 600 hours of mountain flying, all in taildraggers./

We live in a town of 3500 people and the nearest city is 200 miles away. Of course there are no homebuilding chapters nearby, so we spent some of our time learning the hard way. We kept a daily record of what we did and how long it took us. From opening the box to first flight was 51 weeks and 2700 man-hours. After one hour of flight, we took it back to the shop, took the canard off and moved it one degree up. Wing angles of incidence are critical and we recommend verifying the level blocks by making accurate templates and double checking. We now have over 3000 hours invested and $22,000 (Can.). Either the average builder is a real man of action or we are extremely slow. The plans were imprecise in many areas and ignored the realities of maintenance in some cases. As a result, we found ourselves installing inspection covers, turnbuckles for adjustment, etc., hence more time and weight.

Here are some numbers and impressions after 35 hours of flight. Empty weight of 591.5 lbs., including geared starter. Takeoff at 2600' elevation is 700'-1000' depending on day and load. Cruise 160 TAS at 3100 RPM. Stall speed 68 MPH. Approach speed 90 MPH (clean wings). Landing distance is 3000' with cable brakes. We intend to change to hydraulic brakes since the cable pull drums are of poor quality. Despite excessive machining, it would still be more effective to drag your feet.

The other unacceptable area was the pitch trim on the elevator. When solo and low on fuel (forward CG), landing was a difficult and harrowing experience involving speeds up to 100 MPH very close to the ground. The nature of the landing gear will not tolerate a heavy touch without rewarding the pilot with a series of wild bounces which are difficult to damp out because the elevator isn't that effective at slower speeds and large deflections. We installed the T-tail and found a remarkable change in flight stability and predictability especially for landing. We changed the pitch-UP spring on the stick to a light one which also helped the feel. We now aim for 90 MPH approach and with all that pitch left, landings are usually smooth and uneventful although long. During flight we take tension off the trim wheel and the tail trails with no change in trim needed. Flights through light showers need about 20 degrees nose up and a speed penalty of about 10 MPH results. Landing in rain without the T-tail would have been extremely difficult in our Q2, perhaps impossible. Pitch force change with wing contamination is immediate and pronounced, resulting in higher approach speeds and more trim.

There is no setting for all landings, the pilot must be alert and adjust the approach to suit the conditions. On the ground, 45 degrees up on the T-tail has some tail down force but it diminishes quickly during rollout and the tailwheel will skid easily. We tried reflexing the ailerons which had a noticeable effect on trim at speed, but it also diminished quickly at lower speeds and we were not satisfied with it as a means of solving the pitch trim problem. It took us 30 hours to install the retrofit. By retaining the pitch trim springs, it is possible to 'pre-load' the elevator setting which will need a particular setting of the trail trim at cruise. By overpowering the trim with the elevator, it is possible to experiment with various combinations to find the best speed and, in a sense, 'rig' the aircraft. Our elevators are set about 3/4" below the fillet and in flight they move to about 3/8" above the fillet. Accumulating data supports the statement that each aircraft is different, so of course these observations apply only to OUR experience in OUR Q2.

The Q2 handles best heavily loaded. Roll response is very good, even down to the stall, and control response generally is exciting. Mild turbulence is not uncomfortable and our overall rating of the Q2 in flight is excellent.

Fred Baron talked about the difficulty he had making a no-bounce landing (Issue #9). This is how we helped the problem. Stick movements near the ground work best for us if they are small back and forth movements where the elevator moves down slightly and then up again and then down slightly again. This 'milking' movement lets you down in tiny steps and avoids the horrible feeling of hitting the stops before you hit the ground. A smooth, steady pull back on the stick at landing speed will only do so much and soon the elevator is at an ineffective, large deflection and the let down after that can be fairly abrupt. If a persistent skip/bounce follows touchdown, we find we can stop it immediately by pushing the stick full forward. This feels strange at first, but it does not lift the tail. These techniques work for us, but they assume the approach and flare are reasonable. The Q2 will bounce several feet if mishandled and full forward stick will simply break the propeller off. If first contact results in an exciting bounce, the second may be even more so and the pilot should be ready for a go-round. Propeller strikes are fairly common it seems (we've had one too) and a shorter prop might be a popular item.

For a low time pilot, it would be especially helpful to get a ride in a working model before the first flight. Occasionally, a builder has commented that he intends to take a couple of hours in a taildragger before the big day. We joke a bit at that, saying they should try to do so in a Pitts Special or a P-51! The point is many of the taildraggers in service today have low approach and stall speeds. Learning to get a Cub down (which can be pounded on and taxied away after three bounces) will not do enough to fully prime the pilot for what is going to happen to him.

To people contemplating a Q2 project, we give the following advice. If possible, help someone on the finishing stages of theirs. It will not only test your resolve, but will teach you a lot about the construction process, where to use peel-ply, the seriousness of small bumps and the importance of attention to workmanship. Expect to pay more than the 'complete' kit. If you do not consider yourself a little bit handy, are impatient, do not have a workspace other than a living room, have a wife who hates airplanes (and airplane talk), then spend your time doing what you are best at and buy an airplane. 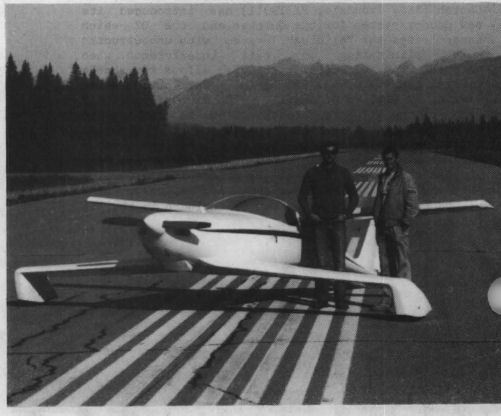