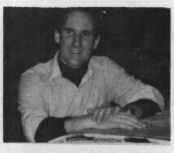 /Kim Singleton claims to have been interested in flying ever since he can remember. His logbook shows his first flight in 1965 and he picked up his license in the summer of 1970. Since that time, he has earned a commercial and instrument ticket as well as a glider rating and hot air balloon commercial license. While attending law school at Cornell, he worked summers for the CAB in Washington, DC and also with an aviation law firm in New York. Uncomfortable with the constant focus of aviation's faults and mistakes, he decided to work for a general practice law firm in Milwaukee, Wisconsin. While there, he started flying again and, more importantly, discovered Oshkosh./

"In 1978, I saw my first Quickie. Unfortunately for my homebuilding possibilities, that was also the year I decided to go back to school for an MBA. At Harvard, I kept up my flying and served as President of the Business School Flying Club. After graduation, I accepted a job with Cummins Engine Company in Columbus, Indiana and persuaded my girlfriend to come along on a long drive through the U.S. Imagine her surprise when I suggest that Mojave was a MUST spot to visit.

Once there, I went looking for the Quickie hangar, accidentally stumbled into the Rutan operation, and was immediately captivated by the Long-EZ. In fact, to my girlfriend's complete dismay, we had to make an extra stop in Mojave on the way back out of Los Angeles just to see it once more. She swears she'll never go back again!

Returning to Columbus, I was thrilled to find that Quickie builder Dick Menning lived only a few miles from me and that another Columbus friend was building a Varieze. Pretty soon I'd discovered homebuilders all over the place and we started a local EAA chapter.

Just when I was ready to send off my check for Long-EZ plans, Quickie Aircraft announced the Q2. Damn, that was a tough choice. The Q2 was more efficient, more sociable (side-by-side seating), and supposedly quicker to build. The Long-EZ was (for me) prettier, faster, longer legged and had tricycle gear instead of a tail wheel. I finally opted for practicality and sociability, but not without some doubts. I still have some and I'll have to fly the Q2 before I finally believe it was really the right choice.)

I ordered my kit in May 1981 and the pieces started arriving in July. I had the kit shipped to my home - but not without some hassles. Quickie had offered to ship all parts to Fullerton (Aircraft Spruce) to be consolidated and shipped as one load. Unfortunately, Aircraft Spruce sent the pieces separately and I paid several hundred dollars in freight charges I hadn't expected. Quickie promptly offered a free pre-fab gas tank as a consolation prize, but after waiting for over a month for the tank I went ahead and built my own. Of course, the pre-fab tank arrived two weeks later.

Fortunately, I was having a ball building my airplane. I'd moved all the cars out of the garage and set up an airplane factory - complete with work table, drills, belt sander, Dremel tool, water level, etc. No special tools, really. Not even a drill press which, in retrospect, I should have had.

One observation on the Dremel tool. I started out with a Sears "Little Crafty". After three months, I burned it out and Sears replaced it with another. In three more months, the same thing. After I returned my fourth took, Sears finally gave me my money back and suggested I'd better try something else. I bought a variable speed Dremel which worked fine for nearly a year, then pooped out. Unfortunately, Dremel does not replace tools on the spot, so I bought another to use while the first was being fixed. I'm now the proud owner of two (count 'em, two) Dremels. The moral - the Sears tool didn't work very well, but they gave good, fast service; the Dremel is a better tool, but service can be slow. One other comment on tools. I don't own a bench sander, but have had very good success simply putting the belt sander upside down in a vice and securing it tightly. It's easier to move the parts around a rigid sander than vice versa.

As I proceeded with the building, I found that every step took at least twice as long as I expected it would. You'd think it would be easy to fit together four fuselage pieces, but it took forever.

I continued to enjoy the project and by March 1982 had a fuselage nearly complete and the wings practically all glassed. The only real problem during that time was severe warping of the canard foam while Dick and I were cutting the wing sections. After discussing it with QAC, I decided to salvage the pieces I'd cut rather than start over. However, I'm sure it cost me some weight. Most of the summer I worked on the cockpit - fuel tanks, arm rests, center console, instrument panel mounting, etc. I also rigged the flight controls. By August, the wings were on and the fuel tank was in.

Then, in September, I began work on the engine. I had a LOT of trouble mounting the engine. In fact, I mounted it three times. The first time I measured the required number of inches down from the top of the firewall (see the plans diagram) starting from the top of the plywood (instead of the top of the fuselage). When the engine went on, the exhaust pipes interfered with the cowling. After I called Quickie, I decided to do it right and pulled the engine off to remount. Unfortunately, that also meant reshaping the magneto box, which was now too low. Many hours later I repositioned all the engine mounts, half an inch higher this time, and went to install the engine. Three mounts were perfect fits, but the fourth (the lower starboard) was out of line. I checked the mounts with a T-square. They were perfect. I tried again to mount the engine. No luck. Finally, in desperation I took the fourth mounting off the firewall, five-minuted it to the engine, and mounted the engine with the other three bolts. I then attached the fourth mounting in its "custom" position. On checking back, I found that the machined mounting holes on the Revmaster engine were not completely true. That fourth mount was 0.15" inside and up from where I thought it should be. After all that I discovered that the cowling still interfered with the exhaust stacks, so I cut the front end off the cowling and moved it forward like the plans suggest. Ugh!

That's about where I am right now. I've probably got over 1000 hours in the project, with final surface finishing and instrumentation and painting still to go. The second Q2 would undoubtedly go faster. Also, a more experienced builder could certainly have saved some time, but I don't believe Quickie's 500 estimate is realistic for the first-time builder. I'd be curious to know whether the estimated 1200 hours for the Long-EZ is equally optimistic. I'm hoping to be finished sometime late this summer and flying in the fall. We'll see.

On the balance, I've enjoyed the project a lot. I work 10-15 hours a week on it when I'm home. (My girlfriend finally started making airplane noises in hopes I'd show her similar attention and affection.) My neighbors have been fascinated. The U.P.S. man has been here so often, he wants an invitation to the first flight.

Now that I'm getting close to the end of the project, I'm anxious to see how it will all turn out. I'm also a bit apprehensive since in my first flight in a friend's Quickie; I flared too high on landing, dropped it in and busted the prop. (It was some consolation to see that the fellow who wrote the Dragonfly test flight article did exactly the same thing.) I've kept up my flying and will do some intense practice before the first flight.

You can order a PDF or printed copy of QuickTalk #9 by using the Q-talk Back Issue Order Page.