/Saylor Milton (#2484) of Fillmore, CA has been flying for about five years as a member of a six-person flying club that owned a Grumman Tiger. He admits that he wanted to create his own plane to fly and at the same time test his "stick-to-it-iveness". A regular contributor to QUICKTALK, Saylor says he is glad to be a resource for other builders./

"When the Q2 came out, I put in an order and about four months later I picked up kits #1 and #2 at Mojave. I stored the parts for a short while and then started work on January 1, 1982. As I own a citrus ranch, a mini-warehouse business and teach physics part-time in a community college, I don't have a lot of time to build an airplane. Even so, I think I may have it about ready to fly in the fall of 1983.

I wasn't really sure I knew what I was getting into when I ordered my Q2 kit. I had done a lot of fiberglass boat work and I'm rather handy around a shop, but building an airplane was something else. If I were to give some general advice to a builder just starting his project, I would say read the plans completely through first. Try to get some idea of what they are trying to tell you. Also, let someone else read to you portions of the plans that are not clear. Plan ahead, there are some timesaving steps that the plans do not necessarily tell you. My greatest handicaps are trying to figure out what the plans are trying to say and forgetting a crucial step from being in too much of a hurry. For example, when jigging the main wing, I forgot to check the level of the wing tips before doing the layup. It turned out that I wasn't far off, however, and I think I corrected the twist during the installation of the leading edges. 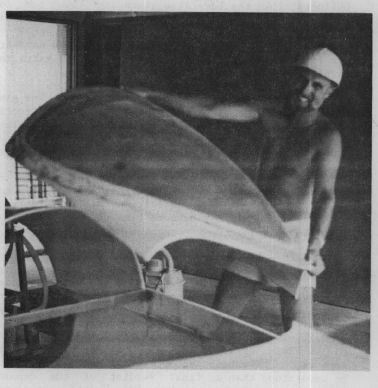 I couldn't properly bend the longeron sticks included in the kit, so I gave up and used them for firewood. I cut a 6" x 48" section out of the green foam sheet and easily sanded it to fit the inside curve of the fuselage where the longerons fit. This curve was then traced on a 1/2" pine board and cut with a jigsaw. It worked out very well. I suggest not joining the top and bottom forward fuselage shells permanently until you have installed the gas tank, header tank, and the canopy lip. It would even be easier to install the canard if the two shells were not permanently joined. In making a detachable fuselage, I placed the three bottom fastening tabs on the aft fuselage portion rather than all of the tabs on the forward fuselage. This makes attaching the two together much easier.

I've used expanding boat foam quite a bit in building up low spots in hot-wired foam cores and to fill other depressions where strength is not critical. One day I mixed up a fresh batch and some of it spilled on what I thought was the floor. It wasn't until later that I discovered that the liquid foam had spilled all over my shoes, expanded and hardened. I couldn't even untie the laces!

My biggest modification is the vertical opening canopy. I took two weeks and 5 plywood models to perfect a hinge that would open vertically and be out of sight. I then had the model made out of aluminum and am very satisfied with its operation. A gas spring will hold it open and it looks something like a car's trunk hinge.

My ambition is certainly to complete the project and fly it to Oshkosh in '84. I would like to say in summary that each step is a new challenge and is certainly time-consuming, but I know that the first flight in my Q2 will certainly be more of a thrill that even my first solo."

You can order a PDF or printed copy of QuickTalk #7 by using the Q-talk Back Issue Order Page.