"Has anyone else had the difficulties I've had with Aircraft Spruce - both with Q2 shipments as well as other orders? They have consistently mishandled order shipments and invoicing....We may be having some problems with Quickie Aircraft, but you can bet they're getting some help from the folks in Fullerton, too. I've finally just started buying all my supplies from Wicks."

"We have found Wicks Aircraft Supply of Illinois to be faster in filling orders than Aircraft Spruce of California. I usually receive my parts from Wicks in 7 to 10 days via UPS. Orders from Aircraft Spruce are usually here in 3 or 4 weeks and often mistakes are made."

"The enclosed copy of my letter and Quickie's response is very enlightening. It would seem that QAC is attempting to rebuild their rapport with the builders, which is most appreciated. It would seem that QBA has been effective in eliciting better factory service. I only hope that this is the beginning of a genuine trend rather than a brief attempt to get the builders calmed down. Time will tell."

/Mr. Little was referring to a note from Debbie Shubert of the QAC staff concerning no charges for an exchange of his QCSA7 part. The note concluded with warm wishes for the Christmas holiday session. -Ed./

"This may be lengthier than you intended (for the performance survey), but I hope you can use the information. I have used two of the standard 42"x30" Cowley props. I am thoroughly disappointed with both the quality and performance. My original prop had too much pitch in it, as my engine would barely turn up 3000 rpm on the ground; book and QAC say 3200. I then sent my prop in to be "reworked" and borrowed another Quickie builder's prop. Another 42"x30" Cowley - should be exactly the same. This one did allow the engine to turn up 3200 rpm static and 3750 in the air. I used this prop for about 12 hours until mine was returned. After putting my "reworked" prop on the Quickie, guess what I turned up...barely 3000 rpm static and barely 3500 in the air. I am going to guy a Great American prop. By the way, the borrowed prop developed a bad crack on the trailing edge after 12 hours. It has been with QAC for the last two months for replacement or repairs. I don't know which because they haven't answered my two letters of inquiry.

My engine ran VERY hot on its initial flights because the baffling was not correct. The plans are very deficient in this area and so I was basically on my own. I flew the plane to Oshkosh with everything at red line. Fortunately, Gene Sheehan was able to see my installation and tell me what specifically had to be done. Now my CHT is down to about 300 degrees. My oil temps have stayed high (260 degrees) and I am working on the problem.

Flying in the rain is one subject that will always be controversial, probably because no two airplanes act the same. I will give my experience with N99SE. I am one of the two Quickies, which flew in the rain to Oshkosh as was stated by Gene Sheehan in the last issue of QUICKTALK. I must correct him, however, because I did lose about 10 mph airspeed. It was really no big deal. The major problem was that the airplane flew at a higher angle of attack, which allowed even less cooling air to circulate my already overheating engine. I decided to land at Wisconsin Rapids and let the engine cool off before proceeding to Oshkosh. The landing was made in the rain, as was my takeoff 30 minutes later. I would classify the rain as moderate. Both my takeoff and landing were uneventful, but I did change my takeoff and landing technique, as I further explain below:

I am a CFI and one thing that I notice among most general aviation pilots is that they do not modify their piloting techniques according to environmental conditions. The technique of takeoff and landing the Quickie in the rain should not be that which the Quickie Owner's manual states for a normal takeoff (i.e. full aft stick). On my approach to landing in the rain, I treat the airplane as if it had structural icing. I increase my approach speed 10 mph and kept the power on until I was ready to flare. Takeoff was similar - I held NEUTRAL elevator until I was up to 70 mph, then eased back on the stick for normal climbout of 85 mph....I think it is foolish to hold full aft stick and let the airplane claw its way into the air at minimum controllable airspeed...accelerate until you reach the airspeed YOU want to start flying. This technique allows the airplane to take off in shorter distance because there is not the drag caused by the elevators hanging down in the airstream....

This letter is getting much longer than I intended, so I will wrap it up with reasons why I LIKE my Quickie. It is easy to find faults, which is all right, because then we have things to fix when we can't fly. I like my Quickie because it gets me places fast and on very little gas. It is very fun to fly and to horse around in. When I fly into an airport, people turn their heads and look. I love telling people how I fly back home from school (200 miles) in less than two hours on only three gallons of gas - when they had to drive 250 miles for nearly five hours. It is great seeing the look on people's faces when I show them a picture of the airplane that I built from a little bit of fiberglass and styrofoam. And the biggest testimonial to how I like my Quickie is that I can hardly wait to build my next airplane - which will be a Q2."

/Recently, QBA queried Quickie Aircraft concerning our reports of rain-induced flying problems. We specifically wanted to know if QAC was aware of these cases, the reason for these difficulties and what should be done by a builder if this condition exists with his airplane. The answer we received is printed below.-Ed./

"We at Quickie have worked with about 8 to 10 Quickie owners who have experience some problems flying in the rain. Elevator position at MID CG has been the telltale sign in each case. We have had very little feedback from builders on this matter unless, of course, they have suffered some problem.

The factors which cause some aircraft to be adversely affected include the following:

2. Flying above gross weight and/or forward center of gravity limits.

3. Improper twist distribution in the wings.

4. Incorrect incidence between the two wings.

As to question of which of these factors is most critical, it is difficult to say. Each in itself could cause a dangerous situation. Perhaps it would be better to state QAC's policy when we are contacted by a builder with a problem:

Each builder's case is handled individually. We will ask questions about the weight and balance, how it was performed, the results, etc. We will usually request that the weight and balance be repeated using different scales and dropping new reaction points. In this manner, we can either eliminate weight and balance as the culprit or confirm it. Canard surface waviness is the next possible cause. Many builders simply don't follow the plans criteria in spite of the fact that we have emphasized this in the plans, the rain effects sheet and in a number of Newsletters. We have prepared a guide to assist builders in obtaining a surface that is at least as good as is called out in the plans. (Reprinted in QUICKTALK #6. -Ed.)

If the above two steps do not solve the problem, we next have the builder make splash templates at various stations on the canard and main wings together with level lines. These templates are sent to QAC and are compared against Master Loftings. We can then determine if the incidences and twist distributions are correct. Only in two cases has the above been necessary.

The corrections in most cases have been very simple for the builders. In one case, it was necessary for the builder to cut his canard loose and raise the incidence about two degrees. This particular builder had purchased the aircraft from someone else, and was flying around with his elevator position at DOWN five degrees. Had he flown in the rain, an accident would have almost certainly resulted.

I am not aware of any builder who has contacted us for help in this matter that we've not been able to solve his problem. We at QAC have flown perhaps a dozen different Quickies. All but two exhibited the same characteristics as N77Q and those two did so after appropriate modification. I would urge any builder having problems in this area to contact us immediately. We can and will help him solve his problem.

The Rain-X product that we have tested should solve the problem of moisture on the canard due to condensation, etc. for takeoff purposes. No builder should take off in the rain unless he has checked the elevator position as requested, and flown in and out of showers to determine his aircraft's response.

If I could give the Quickie Builders Association a quick QC check, I would, but our experience has shown no two aircraft have exactly the same cause. 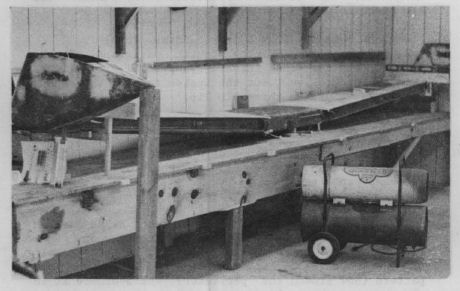 You can order a PDF or printed copy of QuickTalk #7 by using the Q-talk Back Issue Order Page.