(It takes a special breed to endure the rigors of a military academy. The endless physical and academic hurdles would be enough to test the finest of adults. With spare time such a precious commodity; the thought of building an airplane would be nothing but a pipe dream. But when an individual loves aviation as much as Norm Sanford, somehow a way will be found. Norm had the distinction of being the first cadet to be granted permission to start a homebuilt aircraft at the U.S. Air Force Academy. Below is his account of building a Quickie under Uncle Sam's roof:

"It was somewhat difficult at first, but I soon got Captain Bob Reilman on my side who was also an EAA'er. Through him, I was able to obtain permission from the authorities. I chose the Quickie because it comes as a complete kit, and because of its safe stall-spin characteristics, composite construction and good performance. This is my first aircraft building project and I've learned a lot. I have worked on other projects, however, and was familiar with the composite construction process when I began.

I started building Quickie #486 in January of 1981 when my kit arrived. I was a Second Class cadet (Junior) at that time. I worked in the Aviation Club room in the dormitory and usually left the door open to the hallway. The cadets living across the hall would walk over to talk, ask questions or complain about the "plastic" smell and noisy Dremel tool. Occasionally there were visits by colonels or generals walking through on short notice, so I usually kept the place pretty neat. Local EAA members and various cadets helped with the major layups, including my roommate, Greg Leiker. Greg had to put up with my stupid jokes live "I canardly believe it'll fly!"

A year ago I earned my Private Pilot's license and last May graduated from the Academy. After graduation, I loaded the project into a pickup truck and moved the whole kit 'n' kaboodle to a Q2 builder's basement (QBA member Jim Vanwey). It turned a lot of heads when I drove past with the vertical fin sticking out of the back of the truck!

As far as building goes, I've found everything pretty easy. I strongly recommend the Rutan construction videotape for building techniques. My airframe is about 60% completed. I've finished building the major structural components (wing, canard, fuselage, etc.) but I have to stick it all together. Although the plans are easy to follow, some areas can be improved on by the builder.

I'm making the following modifications: The brake system in the plans seems primitive and involves a side load on a 1/16" cable, which is held by Nyloseal tubing only. I rescued Jim Vanwey's toe-brake pedals from the trash bin (he put in hydraulic brakes) and will use them like in the Q2 mechanical brake system, which allows differential braking. My Quickie will have a spinner (most don't) and a more streamlined cowl. Also, I'll probably put in a tinted canopy 'cause I sunburn easily. The instrument panel will be attached to the fuselage, not the canopy, as in the plans - that's too flimsy for me. Besides, I can hop in and out easily enough if the panel is permanently installed. I tried it at Oshkosh with a Quickie that had the same mod. I also put in a standard aircraft fuel cap instead of the plastic bottle cap shown in the plans.

Concerning vendors, I didn't have any troubles with backorders since my order went in just before Ron Lundgren took over shipping. It does help to inventory everything and send lists back to QAC.

There have been good and bad times on this project. The bad times are when the plans specify something that you know can be improved. It takes a lot of brainwork to figure out the effects of your modification. Also, a self-inflicted bad time is when you start a layup at 9 P.M. and can't stop 'til 3 A.M. The joys involve seeing the thing take shape in your hands, and being involved with the fantastic people of EAA. I really believe that EAA'ers are special people. They're people who are achievers, who know how to work with their hands and minds to make their dreams of flight come true. The best part is that they are willing to share their expertise, hospitality and resources with others."

(Norman is presently stationed at Yance AFB in Enid, Oklahoma attending Undergraduate Pilot Training. He says his Quickie progress has been slow since he can only work at it on the weekends, but the fun of flying training makes up for it. We just hope he can make a successful "step down" from a Quickie to an Air Force jet!) 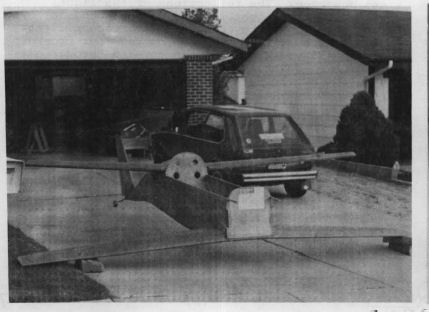 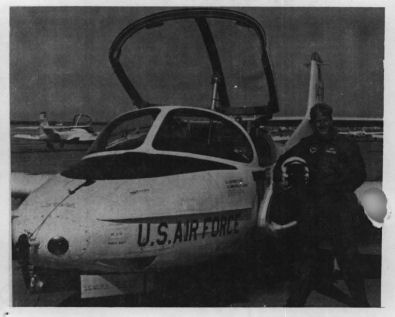 You can order a PDF or printed copy of QuickTalk #6 by using the Q-talk Back Issue Order Page.