(You may remember our first profile in Issue #1 centered around Bob McFarland, our Quickie builder and dealer from Pennsylvania. Since that time, Bob has just competed his Q2 project and we thought it only appropriate to hear the results in his own words.)

"Well, I finally got all the bugs straightened out and got my Q2 in the air this afternoon, and it fulfilled all the promises and claims made for it. At 2700 rpm (Cruise is up to 3200) the airspeed hovers around 135. All the heats and pressures are well in the green. There was a very small amount of right wing-heaviness, which my little roll trim device corrected easily. The sound level is not objectionable - I was able to hear and understand the tower from about 15 miles with the speaker and no headphones.

"Leading up to the big thrill were a number of frustrations. First, the brakes dragged and the differential toe brakes are definitely dangerous, so I've eliminated them completely. They caused ground loops and one broken prop (in conjunction with too little weight in the tail.)

"To correct the nose-heavy condition, I turned out the groove in the tailwheel and filled it with 1.1 lbs. of lead, and moved the strobe flasher from the aft face of the header tank back into the tail section just ahead of Bulkhead 120.

"The first high-speed attempts at lift-off showed me that the wing had too much lift - the tail wheel came off the ground before the wheels. So, I reflexed the ailerons three turns on each side. Now the wheels come off first.

"There is a great deal of pressure inside the cowling, so much that the dipstick access door is forced up at the corners, and the flat part of the cowling behind the spinner was forced forward so it hit the prop bolts, causing an unnerving scraping noise. I'm adding a stiffener inside the cowling to keep it in place. My NACA vents work fine on the ground but seem to work backward in the air.

"There are no fixed standards for the FAA final inspection as each Inspector has his own ideas. Among the things mine wanted were:

1. The Amateur Built nameplate had to be stainless so it would survive a fire to let people know who had burned up.

2. My forward-hinged canopy had to be jettisonable in case I had to get out in a hurry. Not owning a chute, I could have argued this one.

3. The bolts (with copper-colored nuts) holding the rear casting to the engine are too short to show two threads through the nuts. I couldn't get them out without removing the engine, so put a spot of paint to tell if they loosened, and that was acceptable.

4. There were a few wires and tubes which needed additional "Ty-Raps".

"On the whole the FAA was very cooperative and there was very little delay in getting them here to inspect, although I'm lucky as their office is within walking distance of my shop.

"The very worst thing about getting the plane ready was making numerous adjustments on my self-designed dual rudders before I decided to eliminate the toe brakes. I hate to think how a big builder would ever crawl in under the panel - it was hard enough for my 142 lb., 5'-8" frame. Those of you who have the hydraulic brakes are indeed lucky.

"Needless to say, I'm greatly pleased at how everything has turned out, and look forward to my forty hours in a 50-mile radius. All but the sore throat from answering, "How long did it take you to build it?" So, if you call and I'm out flying, try again later. N335RM has priority!"

(Bob has been having quite a bit of excitement recently. On his trip back from Oshkosh, he managed to crash his Quickie (again!) while departing from Youngstown, PA airport. Bob feels sure the accident was the result of overloading. The poor bird would not climb as fast as the runway and hit the trees. Airplane and ego severely damaged. Expect a month of repairs.

On a much brighter note, during August 20-21 Bob helped sponsor a Quickie/Q2 Get-Together at the recent Capital City Airshow in Harrisburg. Together 28 individuals attended, representing 14 projects. About 40 people participated in the evening cookout on a Susquehanna River island and was followed by a builders session on Sunday morning.) 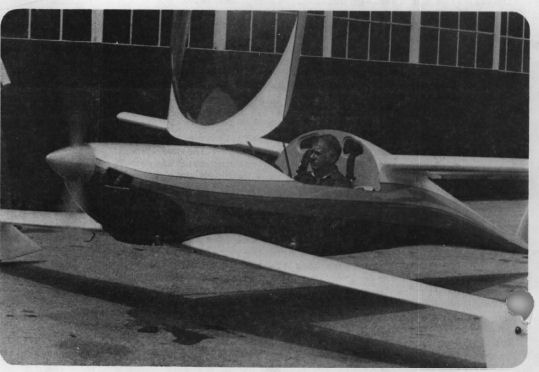 Bob McFarland and his Q2 prior to first flight. The plane is brightly painted in red, orange and yellow.

You can order a PDF or printed copy of QuickTalk #5 by using the Q-talk Back Issue Order Page.