1. To expand on Tom Solan's hint in Issue #2, run 1" strips of masking tape along the edges of the fuselage bottom inside before doing the inside layup. Then trim away the glass covering this after partial cure and remove the tape before joining the sides.

1. (Page 9-10, 10-8) When you make your CS11's and CS17's, the plans say to press fit the CSM4 bushings. I had mine vibrate loose. I suggest you flox them in and also it wouldn't be a bid idea to put one BID on each side. First put silicone sealer in the bushing hole sc epoxy doesn't get in. If you have already finished your Quickie, suggest you keep an eye on them.

2. One tip I can pass on is to complete the wing and canard before making any of the ailerons and elevators. Then fit the foam cores to the wing or canard and sand the foam so they feather perfectly with the trailing edge. This prevents the leading edge of the elevators from being too thick to fit into their slots.

1. A way to pressurize your fuel tank (a' la the Q2) also provides a fuel tank vent which won't dribble fuel down the side of the fuselage from the fuel cap:

2. (Page 14-4) Blocks may be built under the ends of the CSA3 rocker arms for aileron stops.

1. (Page 5-3) QPC 24 refers to the BL49-BL88 elevator sketch. The most obvious "sketch" is located in the lower right-hand corner. This particular sketch is shown correctly, leading one to think the QPC is in error. The incorrect sketch is actually portrayed above in the "End View Drawings" of the foam block prior to hot wiring. The drawing should look like the one below: 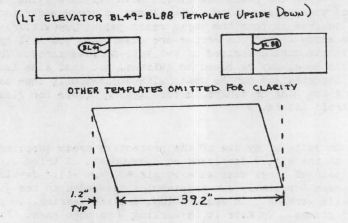 If this QPC is not followed, the elevator will have the incorrect skew.

1. (Page 18-1) The diagram shown in the plans and in the Owner's Manual shows double wires used from the ignition switch to the coil so that engine failure does not occur due to a simple wire breakage. As the diagram is drawn using one double pole switch for both wires, there could be a broken wire or defective half of the switch and it would not be known until the other half broke (and the engine stopped). By using one half of each double pole switch for each wire, as below, a broken wire or defective switch can be detected by turning one switch off at a time. Also run one ground wire directly from the battery to the engine. The negative terminal on the voltmeter can be used as a common ground terminal. 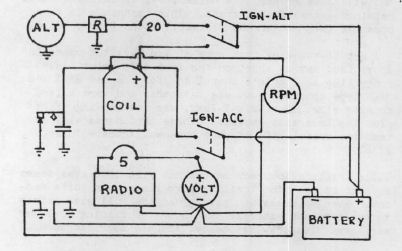 1. I have heard of a cure for pulled head bolts on the Onan engine from a group in California. Install 1" long helicoil inserts in the block and use grade 8 head bolts.

1. The bolts around the exhaust valve are not holding. The studs are actually pulling out of the aluminum block from the heat cycling. I believe 9 out of 10 Quickie Onans will have leakage occurring at the exhaust valve area. It will be a blackened area at the top of the gasket, usually on both sides. I now believe that since the engine is cocled backwards (intake first, then exhaust), we are getting cylinders too hot - more than the cylinder head temperature gauge shows. Onan brings the air in through ducting to the exhaust first. I am not looking for a different engine.

1. It's sad to hear that other builders have been having problems with blown head gaskets and leaky valves. I am on my fourth set of head gaskets. I have enlarged all my studs to 3/8" that hold the heads on. Engine temperature is at acceptable levels and I have made soft aluminum gaskets for the engine. They seem to be holding but I have an exhaust valve that is starting to leak again. This is a plea for anyone who has the answer.

/Ed. Note: From the letters we have received recently along with comments at Oshkosh, it is evident that there are concerns about the reliability of the current Onan configuration. As note above, a common complaint has been pulled head bolts. While some builders are putting their efforts into modifying the present system, still others are looking into the possibility of an entirely new powerplant. There can be little doubt the upsurge in ultralight interest has created a whole new generation of small efficient engines (a condition which did not exist when the Quickie was originally designed). QBA is naturally interested in hearing of these efforts so that we may pass on any benefits. If you or someone you know has made an engine modification or improvement, we ask that you let us know. We will then write a detailed report after flight-testing has been completed. Failure reports will even be of interest as they may prevent duplicate attempts by others. Please, only tested ideas will be printed - no untried concepts./

You can order a PDF or printed copy of QuickTalk #5 by using the Q-talk Back Issue Order Page.