".....We think the effects of flying the Quickie in rain or with an otherwise 'dirtied' canard should be given much more emphasis, especially for first-time flyers. Our Quickie, with just a few drops of rain, will come off the ground at close to the normal speed but then immediately drops back to the runway; it does this once or twice and then is ready to climb out at perhaps 10 mph faster speed than otherwise. The additional backpressure required on the stick is truly amazingly large. We've not flown in heavy rain, but in light rain we lose 10 to 15 mph of cruising speed as well as gaining the untrimmable increase in pitch force.

.....We've also flown in light snow showers; the melted snow after removal from a warm hangar produced the usual multiple-takeoff effect but that evaporated quickly and the dry snow showers produced no noticeable effect. We certainly think these possible effects should be clearly spelled out to the new flyers; NO initial flights with ANY moisture or other aerodynamic dirtiness on the canard! We would be very interested in hearing about other flyer's experiences with disturbed air on their front flying surfaces; those we have talked to give us the impression we are not alone.

.....We haven't ground looped our machine (yet!) but my partner in particular has used up more of the width of the runway on landing than is at all pleasant; this was right after he made beautiful landings in Cubs, it should be pointed out. The direct coupling to the tail wheel is part of the reason that I am not convinced a lot of conventional gear time is useful, but in any case the machine is no Cub when it comes to landings. Peter Garrison no doubt thinks the same of the Q2!"

/Will's description of performance degradation due to canard irregularities (rain, bugs, etc.) is being suspiciously echoed by other builders. Since there are several Quickies and Q2's actively flying in these environments, it may be a good subject for a survey in the near future. -Ed./

"I was particularly interested in the letter from Ron Carlson (Issue #1) concerning the lack of interest Quickie shows to its customers. I have experienced a regular horror story of broken promises, unanswered letters and interminable waiting for back-ordered parts to arrive. I have documented each letter and phone call to Quickie and the list is much too long to relate here.....It took eleven months from my original inventory to get the back orders and then, not through the efforts of Quickie (Aircraft Corp.), but only by talking about this with Aircraft Spruce.

Now the frustrating thing is the builder help phone. I have tried for weeks to get through but the line is always busy. In desperation on an engine mount problem, I wrote a letter with a drawing and included a SASE. That was a month ago and as yet, no answer.

The reason for this long dissertation is to add my concern to others for the future of Quickie. If they treat all builders this way and the word gets around, QAC will see their sales drop dramatically. I'd hate to see this happen, they seem like nice people....."

"The PAT-1 recently crashed killing several on board. One journal suspects the cause to be linkage failure. I feel like this was an avoidable accident, because of all the planes flying the canard configuration is the only one that could survive IF there had been provision for an "emergency flap" control that would deflect the elevators to the full down (pitch up) position. Falling at V(min) sure beats crashing at V(max). If such a redundant control had been designed in, The prototype may not have crashed after the prop separation. I would like to lobby Quickie to design such a backup as a safety measure."

".....I feel that an exchange of ideas and information among Quickie/Q2 builders could very well reduce building time by weeks and months. I'm sure there must be many who have taken on a project who have never worked with this medium before or who, like me, never even attended a seminar on the subject.....SN 0053 has the grass wheels, rounded and filled fin and rudder, Hoerner wingtips, buildt-in NAV/COM antennas, an old Narco MK III, a contoured in venturi system to run a T/B, cabin heater from left exhaust stack, a hinged access door to the fuel filler, a removable access door for oil checking, a motorcycle style air filter on the carb, a much more streamlined bump over the carb air heater, a choke for winter starting, a single panel lamp, a positive canopy support, a mount for a 350mm camera on the right sill of the canopy, and a hand grip for the stick with "QUICKIE" molded in. This latter comes from a QUICKIE sponge mop made here in Fultonville, NY....." 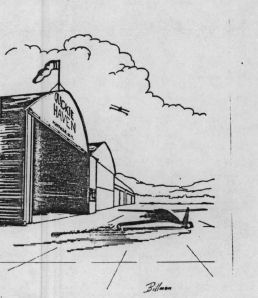 /I wanted to ask Owen if he has room for himself in there with all those mods, but thought it best to see the plane in person first. The drawing was also one of his "extras". Pretty impressive for a man who does nothing but work on his airplane. -Ed/

You can order a PDF or printed copy of QuickTalk #2 by using the Q-talk Back Issue Order Page.