Terry has submitted a rundown of what his first flight was like.

February 28, 2000 - Centennial Airport (APA), Englewood, Colorado. The day started as a typical Sunday morning ... early church, a nice family bunch ... but something was a bit wrong with good ol' dad. He was a bit distracted. After nearly two and a half years of building and tweaking, he was really close to flying his Q-200 for the first time. The FAA airworthiness inspection on Friday went flawlessly and now all that lay in the way of the big event was to give the airplane a final once-over inspection, reinstall the cowling and fuel the tanks. After an hour or so of moping around the house, Pam recognized the affliction. She said, "Why don't you just go hang out at the hangar for a while?" I believe the front door to the house can be repaired!

My buddy Jim and I arrived at the airport about noon and jumped right into the final inspection. I used a rendition of a checklist that Sam Hoskins sent out on the Q-List last year. Everything was in order. By the time the cowl was fastened down, it was approaching 2:30 p.m. That is when I began to pace about like an expectant father. Was I ready? Yes ... no ... yes ... temperature: 70 F ... winds: kts, down the runway ... traffic: light. We were dialed into the tower on a portable transceiver. "Jim, call a fuel truck!" I said. He did and I pace some more. We put 15 gallons in the main and transferred 4.5 to the header. I installed a 20-pound lead-shot ballast in the right-side baggage compartment and re-checked the weight and balance. We were at 1029 pounds and a 44.3" C.G. (47.8% or range).

I pulled out the flight test card that I'd prepared over a month earlier and reviewed it for the 100th time. I wanted this to go smoothly. The main objectives were to check engine reliability and flight control characteristics ... and live to tell about it. Jim brought a video camera along "just in case" and he began to get it out. That was the final commitment for me. I'll be darned if I was going to chicken-out on camera! After all, I've been training for this with my EAA Flight Advisors for the last two months and have begged, stolen and coerced rides in every Q-200 I could get my hands on at Ottawa for the past three years! I called the tower on a cell phone and discussed the flight test plan with them. Depart the main runway, enter left traffic, climb to 7500 feet directly over the airport (500 feet over pattern), orbit at that altitude until the testing is complete, then call tower and re-enter the pattern for a full-stop landing. One has to be very businesslike when test flying out of the 2nd busiest GA airport in the nation on a Sunday afternoon. One more quick preflight (to calm down and focus more than for safety) and I slipped into the comfy little cockpit. Now down to business, checklists and some fun! The "willies" were gone ... for now.

I preset the elevator to neutral and the reflexor equivalent to 1/4" trailing edge up to ensure that the tail wheel would stay down on the takeoff roll. Engine start, warm-up and taxi were nominal. One last brake and steering test confirmed that this little bird would do what it is told once we get out onto the runway. Run-up was also nominal with pressures and temps in the green. Hold for a Citation on close final, then tower instructed, "Taxi into position and hold". Where the heck did those "willies" come from? Darn it, they must have stolen aboard in the baggage hold. Then it came! "Experimental 97PT Cleared For Take-Off, Left Closed Pattern Approved". I hardly heard the second half of the transmission! My heart just decided that it wasn't going to be a party to such craziness and dropped right through the bottom of the seat. I repeated the clearance in a shaky voice, checked for GOD in the right seat (Check!) and poured the coals to the little O-200. I think I screamed something about then, I am not sure.

The take-off was impressive with great acceleration and good handling qualities. I concentrated on the centerline. When I felt we had the smash for rotation, I gave a little tug on the stick and we leapt from the runway. A little forward pressure to accelerate and back again to stabilize the climb at 100 mph indicated. WE WERE FLYING!!!!! Back to work! I neutralized the reflexor and checked the airspeed, noted a 1100 fpm rate of climb and engine vital signs into the portable voice recorder I stowed on board. At about 500 feet, I did the initial check on the flight controls. Left wing was heavy, but I had good control response in all three axes. What? What is that darned vibration? Oh, Jeese, it's my knees and hands. I was shaking like a leaf. The utter thrill of flying this wonderful machine that I built, coupled with the terror of the last fifteen seconds has sent my nerves into meltdown! Okay, we are at test altitude, just fly a lap and calm down! Temps & pressures are good ... FUN TIME! Whew, that was awesome!

Laps two and three included more control system testing and an unsuccessful attempt to trim the heavy left wing. On lap four upwind, I pulled her up about 100 feet, pulled back the power and booked a pitch buck stall at just under 75 mph indicated. On lap five upwind, I reapplied the reflexor to check its authority and effects. Everything was GO for landing. Here came those darn "willies" again. When I turned the volume up on my headset, there was traffic everywhere. It seems like everyone in Colorado was coming home from their Sunday afternoon flights at once. I reported intentions for descent to enter the pattern and got immediate approval from the tower with some not so good news. The winds were now at 30 degrees to the active at 22 kts. Pretty fair crosswind component for my first landing! Luckily, tower gave me priority for the alternate parallel runway so that I did not have to deal with the Bizjet traffic.

I pegged downwind at 100 mph and slightly below pattern altitude for visibility, just like the Q-Jocks at Ottawa taught me to do. I pulled power abeam the number and set the glide. "Cleared to land" ... oh Jeese! Here we goooooooo! In turning base, I pulled a "spam can", and let the nose drop. All of a sudden, I've got 125 mph indicated. This slippery little guy was letting me know that airspeed control is everything on approach! I decided that even though it wasn't planned, I had to slip down now and try to bleed the speed with a flatter final. The turn to final was dead-on and I slipped one more time briefly to get a little lower without adding speed and then held a slight wing low attitude to keep on course in the crosswind. That darn runway was coming fast. A last check of airspeed on short final showed about 120 mph indicated. Well, to say the least, BOTH landings were uneventful. I am glad that I had over 8000 feet of runway. The initial touchdown was at a good attitude (slightly tail-first due to the reflexor), but due to the speed, as soon as the mains got on, the spring of the canard sent us back to the sky. I applied a short burst of throttle and set up for landing number two about 500 feet down the runway. I learned from my many QBA mentors never to try to force this airplane to land. The second landing was what the first would have been if I had controlled my airspeed better on approach. The little plane just slid onto the runway and I set full reflexor, then some forward stick to keep her on. Braking was ample and she rolled out straight as an arrow. I used the reverse aileron steering method once into the rollout. I had practiced this during the last few of my high-speed taxi tests and like the "soft-steering" it provides. To be honest, I had almost totally forgotten about the crosswind and the Quickie handled it very well.

I taxied to the ramp wearing the infamous "Perma-Grin". When I got back to the hangar, it all came rushing back as I reviewed the details of the flight with Jim over a bottle of champagne. Then ... I just needed a nap!

We conducted a comprehensive post flight safety inspection over the next few days. The only major issue was that I had vented a couple of quarts of oil out of the crankcase breather. That is another, shorter story.

A side note: I was able to get all of the stains out of the upholstery, but that little tear in the cushion directly under me was not easily repairable!

I have since flown Q-200 N97PT twice. We have a whopping 1.7 hours of flight time now. I didn't get the "willies" on the subsequent flights and am starting to get a good feel for its responsive controls and rocket-like acceleration. Soon, I will actually leave the proximity of the airport ;-). I think I am in LOVE! Don't tell my wife!

Just a quick update on N181MB.

I found when running at power settings above 4800 RPM the Subaru engine water would very gradually increase in temperature. A small power reduction would correct the situation.

Departing Sun-n-Fun last year, I had a long slow taxi out to runway 27 and water temps were getting up in the 220' to 230' range. I can usually taxi up behind another aircraft and use his prop blast to cool down but, this time, I found myself number one with a hold for an aircraft fly-by with an unsafe gear light. Just as I was about to shut down to cool down, the signalman gave me the sign to roll. By the time I was airborne temps were falling below 220' and the trip home was uneventful with tail winds giving me ground speeds of 1770 to 197' MPH.

I think the overheating condition will be eliminated with the addition of a GM heater core mounted in the left cowl inlet. This is a bypass system that starts cooling as soon as the engine starts up and at 1900 the thermostat opens and brings the two main radiators into the cooling system.

I have enclosed some pictures of Doug Brablec's and my hangar that we call "The Quickie Nest". We are storing the Quickie on the far end for a couple in England. 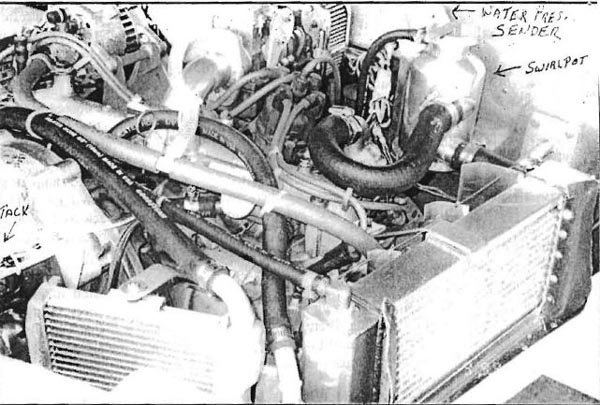 Inlets on either side of the 55 watt halogen light are connected to scat ducting going to the gascolator, left side and right side for two solid state crane ignition modules and two Bosh coils which are located in the old Revmaster mag & starter box. The alternator is a 37 amp. Hitachi. 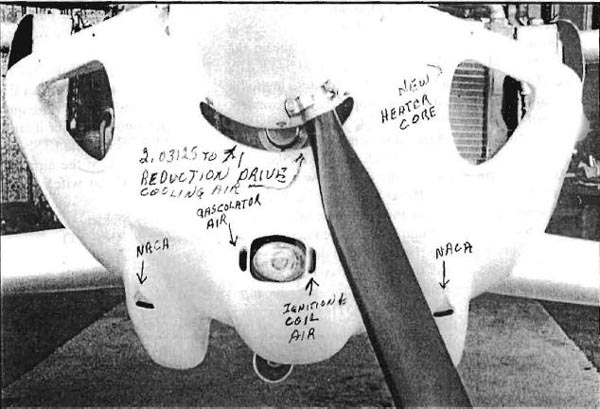 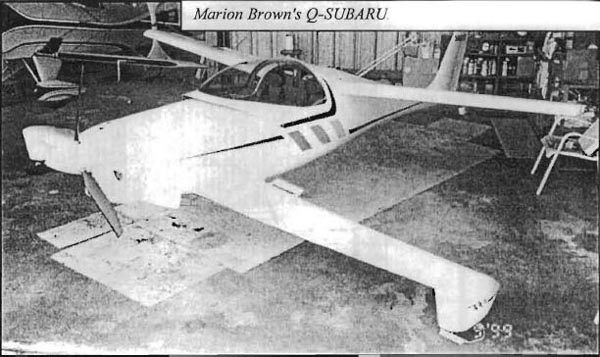 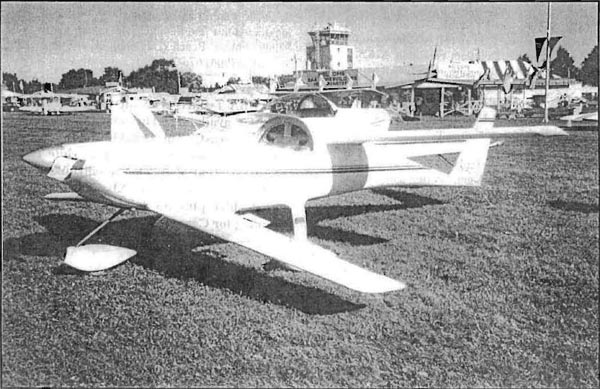 You can order a PDF or printed copy of Q-talk #80 by using the Q-talk Back Issue Order Page.