THE "ALMOST READY TO FLY" PACKAGE: You get:

** A placard sheet of cut out & apply "panel words". Both white on black & black on white on the same sheet.

** Set of 2 "EXPERIMENTAL" words in white or black

** The "PASSENGER WARNING" sticker - colors above

Steve Kulczycky from British Columbia, Canada. Steve's flying a Q-2 with Revmaster 65. Talking with Steve at OSH 98, he said he flies it every chance he gets and looks forward to the weekend trips to local airports and fly-ins. Steve's first flight was in 1988. Congratulations, Steve! 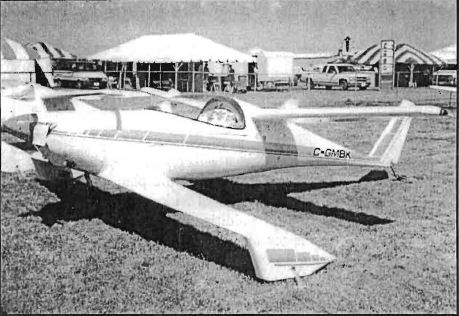 Ed. Note: This article was taken from the Canard Aviators Internet e-mail list. It's published here with the permission of its author Ed Dokus.

A very common complaint against newly completed homebuilt aircraft is poor braking effectiveness. You've heard it from a variety of homebuilders and read it in a score of first flight articles. I've had first-hand experience with the problem when taxi testing our newly completed Vari-viggen, N106VV.

They say you don't get anything for nothing. If the engineering effort is not expended in the beginning, you'll play for it by trial and error fitting of different wheel cylinders, master cylinders, brake discs, and pedal linkages. Of course we rely on the designer to do all the necessary number crunching. Alas, many tend to take a shortcut by using commonly available components without a single thought given to the requirement of the braking system.

I've heard a number of builders describe their braking problems and read of some "Viggen braking problems in the RAF Canard Pusher newsletter. Rutan mentioned braking problems on the prototype 'Viggen but subsequent builders had to wade through the same problem themselves. How about you various 'Eze builders out there? Were the plans built brakes adequate?

We should all be aware of the fact that designing an aircraft is a monumental task and an awful lot for one man to handle. Therefore some poor engineering judgment is bound to creep in. If you want to see a robust brake system, take a look at the brake components and pedal linkage used on the Venture. The large mechanical advantage of the pedal linkage and use of dual brake cylinders on each wheel shows that no wishful thinking was involved in this design.

If you want to determine if your project's brakes are going to be adequate, how does one attack the problem using grade school arithmetic and high school physics? Fortunately, that's all it takes.

The quantity used to describe or rate brakes is kinetic energy in foot-pounds. A landing aircraft has kinetic energy by virtue of its weight and speed. Therefore, knowing the aircraft weight, and allowing a landing speed of say, 70 mph; one can compute the kinetic energy to be dissipated. Since high school physics gives kinetic energy as:

A 1500 pound aircraft landing at 70 miles per hour would have a kinetic energy of:

If we have 2 main wheels, then each wheel will have to be rated at half of 245507 or 122753.5 foot pounds. The Cleveland 199-103 kit which consists of a 5.00 X 5 aluminum wheel, organic pads, and a 30-9 wheel brake cylinder has a rating of 117,500 foot pounds. This is a little shy of our requirement and one may be tempted to use it. This was the kit used on our 'Viggen and let me tell you how inadequate it was! Not so much due to the marginality, but that, in addition to woefully inadequate pedal linkage design resulted in total inability to steer the aircraft. I guess it had a turning radius of about a half mile.

Reworking the pedal linkage resulted in improved braking and ground steering control, but just didn't cut it for braking as borne out by the subsequent taxi tests. It took about 2500 feet to brake to a stop from a taxi speed of 60 mph. Brake fading was apparent and pad wear was excessive. A better choice would have been the 199-197 kit, which used a larger wheel cylinder and had a rating of 289,000 foot pounds. However, we didn't have $800 to shell out at the time and had to find another solution to our problem.

We attended a maintenance seminar held by Cleveland Brakes at Plymouth airport and got some very useful advice from the Cleveland representative. He told us that he gets the same problem presented to him at Oshkosh at least fifty times during the convention. He recommended the 199-93 upgrade kit, which consists of metallic pads and a thicker brake disk. At $166.00 this was a much more viable solution to our problem. This kit boosts the energy rating to 155,000 foot-pounds and certainly did the trick for the 'Viggen. Steering is very satisfactory and braking to a stop from 60 mph doesn't show any brake fading. Additionally, the stopping distance at 60 mph is considerably less than 2500 feet.

As mentioned earlier, pedal linkage design is an important factor in the performance of the braking system and must be designed so as to produce the hydraulic pressure at which the brakes are rated. This is about 300 psi for the Cleveland brakes used. The master cylinders used were Cleveland 10-35's. These have a piston diameter of 5/8 inches.

The force needed to produce 300 pounds per sq. inch is:

What I have seen since day one on 557BM is a back wing that wants to go flying before everybody else on the airplane. Having a copilot on board really helps the thing behave better. I had assumed that my original leveling boards were good and that the aircraft was set up right. The first hint that something might be a little different was when my taxi testing got fast and the tail went up in the air.

During first flight, I ended up driving my reflexer to maximum aileron trailing edge up. Then I had to dial in 8 degrees of trailing edge down elevator. There is still a good bit of pitch authority there, but you are carrying trim drag and I essentially lost a great trimming device in the reflexer (mine is powered by a electric actuator via a coolie hat switch on my control stick) because it needs to stay where it is. Several months into flying the thing Gene Sheehan stopped by to see how everything was going and I told him about my laundry list of problems. After fixing the venting problem that vexed my Ellison (by the way, I'm back to using the TBI with good results) I again spoke to Gene about the 8 degree trim thing. He said based upon his experience I would need to change the incidence of one of the flying surfaces. He estimated about 2.5 - 3 degrees. He also said that you "got what you got" no matter what you set the wings to. Gene said I could change the canard or the wing. He said another option was to change the outboard slot cores on the wing to a little trailing edge up, but I never liked that since that's another trim drag problem. He also told me to just keep flying it as long as I felt comfortable with the handling qualities, which is what I did. I figured I would eventually do the back wing since there was less to move around.

Anyhow, I was getting a little irritated with not having my reflexer fully engaged and tired of the trim so I decided to do a little research into what I had. I made up some new leveling boards with the little angle finders epoxied to the level lines and it showed up a 2 degree error.

So Saturday I got started and by 1800 Sunday I had the wing free. It took me 16 man hours working alone to get this far. I don't care what a lot of other folks have said ... this is a major pain-in-the-butt. I had to split the seat back bulkhead and the FS-94 Bulkhead at the top. I'll have a number of repairs to do before it's all over. Sometime this week I should be able to get back up to Mojave to finish the sanding and get the wing retacked. I'm estimating a three and a half week down time.

I went through 100 fluid ounces of water at Mojave today (I wear a Camelback hydration system when I work on the plane up there and I just plain sucked it dry) and I was still parched. As I write this, I still have a dehydration headache.

You don't ever want to have to do this, friend, because it puts you back on the emotional roller coaster. And, of course ... I'm itching all over from the glass dust.

Ed. Note: Brian also included an article about his first test flight after he made his modifications. This will appear in the next newsletter.

Here's some info I got off the Internet if you're looking for flight instruments. He's recommended by the EZ guys.

If you're in need of the six basic flight instruments, you should check out Howard Francis. Two-plus years ago I bought a used attitude indicator, DG, altimeter, VSI, electric turn and bank, airspeed indicator (he paints in the arcs to your specs) and a 2-1/4" vacuum gauge. I saved about $1,000 from what I would have paid for new. All of his stuff is used, but before Howard sends them out, he rebuilds whatever needs doing - he is retired from this profession. Myself and two other local builders have bought from him, the instruments look like new. However, you will be able to judge for yourself since after telling Howard what you want, he sends them to you when they're ready. Then you either accept them and send him a check or return them.

Last month it became apparent that my attitude indicator was sticking. Although I was careful to occasionally spin it up during the two years I had it, I probably had not done it often enough, so I called Howard to see if he had a replacement he could send me. He did not at the time, but told me to send mine to him for repair. Well, I just didn't get to it very fast and last week he called me to see what its status was. So I sent it off and had it back right away as good as new. He even paid for the return shipping. You can contact him at: 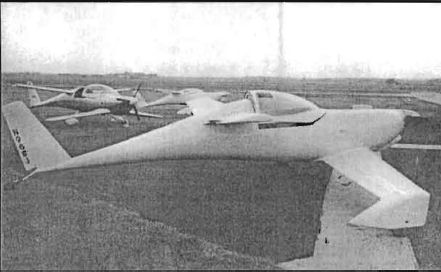 Even though this photo can't capture the beautiful sunset we saw, it does have three good-looking planes in it. If you squint real hard you can see the sun in the background. 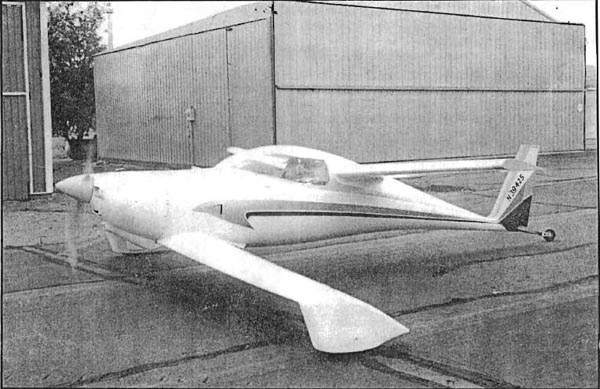