A quick update on my Q-2. I converted it to a TRI-gear because I needed a new set of brakes. I should have concentrated on new brakes. The TRI-gear system is OK, but the Matco brakes supplied with the kit did not have the power to stop me within a 3000' landing rollout. I dealt with Matco and they have a solution. They provided an adapter kit that adds an additional caliper and brake mounting plate. The original TRI-gear kit axle is not long enough so I changed to an axle that Matco has available. I now have two calipers on each wheel. They work good, touchy, but good. I am building new exhaust pipes, just got to #3 and burned a hole at a weak spot. Looking forward to another year of Q-TALK.

I finished my Q-200 in 1990. Ever since then I have fought high oil temperatures. When the outside air temperature went above 90?F, I just couldn't keep the oil temps below 225. I tried all sorts of things inside the cowl (tighten baffles, seal everything, add oil cooler, duct more and more air to the cooler, etc.) but it never seemed to solve the problem. I would make minor improvements but it was still getting too hot. The airplane was (and still is!) a tremendous joy to fly so it was never a high priority problem. Everything was fine except in the heat of the summer. It was annoying but not enough to keep me from flying it!

At Ottawa 1997, I talked with Bob Malechek and noticed that the exit opening on the bottom of his cowl was larger than mine. I was beginning to suspect that the problem was not inside the cowl but the shape of the cowl itself. Eventually, I was directed to an article in the September issue of Sport Aviation entitled "Engine Cooling Problems" (sorry, I don't remember who gave me the pointer). I suppose if I had been keeping up with my reading I would have found it myself!

This article describes how to measure the pressure differential between the top and the bottom of the cowl. Basically you construct a water manometer out of plastic tubing with a loop with water in it so you can measure the difference in the water levels. One end of the tube goes on top of the engine ("high" pressure side of the cowl) and the other on the bottom of the engine ("low" pressure side). The article says that if you don't have at least 4.5 inches difference in the levels, you won't have enough cooling. I could just barely get three inches in the best flight condition (cruise). During climb it was much worse than that.

Once I finally had some data, I thought I finally had an idea on what might be the problem. I considered several cowl flap ideas, but everything I designed just seemed too complicated (Murphy and I have always had a very close relationship!). I finally decided to cut a hole in the bottom of the cowl and re-glass a bigger opening. The opening is about 10" wide at the trailing edge of the cowl. It narrows to about four inches in the front. It is not a triangle because I wanted as much clearance between the cowl and oil sump (which is about 4 inches forward of the rear). I lowered the cowl about 1.5 inches around the oil sump. I figure this gave me about 15 square inches of additional exit air. I've included some pictures.

Rather than just glass a new shape to the cowl, I glassed it so that I could attach it with four screws and nutplates. I also glassed a lip in the part of the old cowl that I cut out so I could put it back in place. This gives me one I can use in the winter when I don't need the extra cooling, and one I can use in the heat of the summer. It is set up such that I can change the "cowl flap" by removing the four screws and sliding it out the rear of the cowl - without removing the cowl. So I now have a "ground adjustable" cowl flap that is extremely simple and totally reliable. 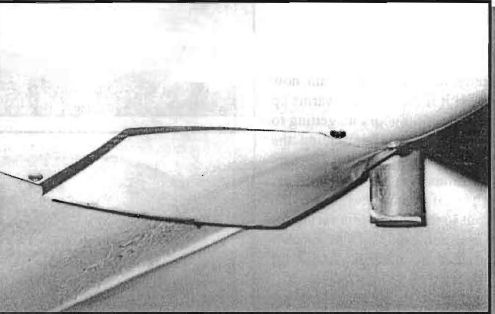 At Ottawa last year (anybody remember how hot it was?!?), with the engine already warm, I took Terry Sickler for a ride which would have normally easily exceeded redline on the oil temps (no offense T!). But this time it didn't get over 220, even in a long climb. Honestly, I don't know of a better test of my new "cowl flap".

I'd love to give you all of the scientific data on what this change has done but I just haven't had the time to gather it. The oil temperature now runs 25 to 30 degrees below what it was before. I assume there is a speed penalty for the bigger opening but I haven't been able to find it. All I know is that the problem that has plagued me for year is now just gone!

So if you're having problems with heat, go look up that article (you can purchase it from EAA's website) and take some measurements. The "tools" will cost you less than five dollars and about an hour of your time. The real lesson is to just keep working on your problems - eventually you will find a solution. Mine took almost 700 flight hours to fix! As far as I'm concerned, my plane is now PERFECT!

I've got the Tri-Q2 pretty well finished. I am now trying to get some paint on it if the weather warms up a bit. After 5 1/2 years plus 3500 hours it's getting to look like an aeroplane. I have been running the engine and it sounds good after sitting about 12 years in the shop. All the instruments seem to operate OK. So now I need a couple of radios and finish the painting so I can get it out to the airport this spring for some taxi runs. I'll be 79 in June and had a pacemaker last year so I'm sweating out my medical. I hope for the best. See you at Sun 'N Fun.

Ed. Note: Gordon, best of luck to you on your medical. You have put a lot of work into your plane and I know you would like to get it in the air. 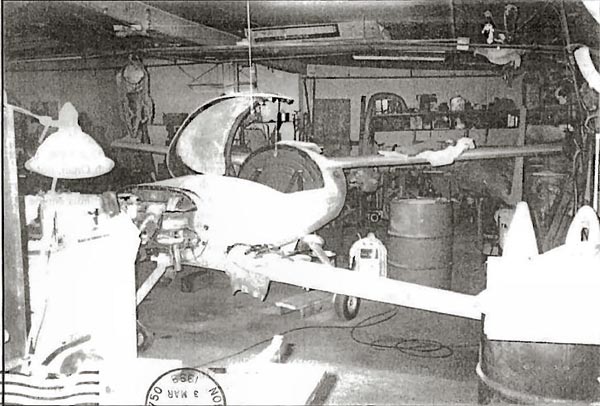 Gordon Hanson's TRI-Q2 getting closer to that big trek to the airport!

Here are some updates on my Subaru engine installation. I have had some problems with the NST reduction drive, but it has been upgraded to the latest modifications. I also changed the gear ratio from 1.69 to 1 to 2.03 to 1. The three-blade Warp drive prop has been shortened from 58 inches to 55 inches with 24? of pitch.

On the last test flight two days ago I was turning the prop 2600 rpm and indicating 172 mph @ 1500 feet. The engine was running at 5281 rpm. The engine is still going lean at full throttle so a little tailoring of the needle should give full power and a few more revs at the top end. 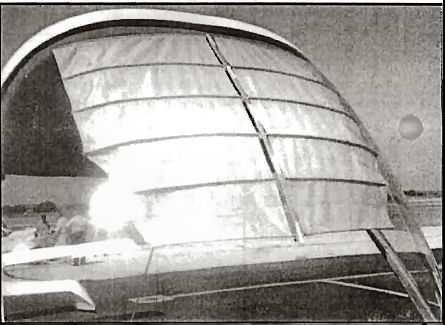 The above two photos are from a Dragonfly that was at Ottawa 98. This builder has an accordion type sun visor that's retractable when not in use. It seemed to work fairly well and could be retracted quickly when getting near a traffic area.

You can order a PDF or printed copy of Q-talk #73 by using the Q-talk Back Issue Order Page.