While laying out and building my panel I decided to use a digital tachometer since I have found the analog tachs I've seen in all general aviation planes I've flown to be only marginally useful. Meaning that out of the -451 of viewable arc in an analog tach, only a needle's width near red line ever gets used and it's always questionable exactly what RPM you really have. I spent much time in catalogs and Sun-N-Fun evaluating digital tachs. Many of them were too cheesy for a primary instrument and a few were too expensive.

I chose the Taskem for its reasonable cost, multi-function, high accuracy (+/- 10 rpm), and standard 3 1/8" hole mounting configuration. I also like the positive signal input scheme. The instrument has a large LCD readout relative to the others I looked at. Its additional functions are engine hour meter and flight duration meter. Redline rpm can be set. Upon exceeding redline, the display blinks as a warning.

The Taskem eliminated the need for a Hobbs meter which saved panel space and the input switch and subsequent wiring.

Installation is fall-down easy. Slide it into a 3.125" hole and attach four panel screws. To hook up the drive signal for an O-200 you will want to buy the tach sender, P/N 303-DGT and tang, P/N 444-2, which are made by Mitchell and sold by Aircraft Spruce. The tach sender screws onto the mechanical tach drive on the accessory case. Two small gauge wires run from the sender to the tach. The tach is also equipped to use an inductive pickup accomplished by wrapping an input lead around a sparkplug wire. But, why bother. The beauty of the instrument is you don't have to resort to such a hokey hookup. On the Revmasters, though, this may be the only option.

The only objection I have with the instrument is that it is battery powered and has no provision for using panel power. I don't like having to rely on stand-alone batteries but I decided to live with it. You get several years of life from a 9V battery and it won't loose its memory during battery changes. The battery change-out is done from the front so you don't have to remove the meter from the panel.

The cost of the Taskem tach was $145 and the sender/tang was $42. For general info, the tach/hourmeter will work on 2 or 4 cylinder, 2 or 4 stroke engines. It has user selectable high, medium and low sensitivity input options. All this is covered in reasonably easily to follow instructions. 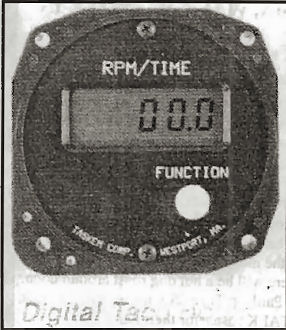 You can order a PDF or printed copy of Q-talk #68 by using the Q-talk Back Issue Order Page.