When I started taxiing my Q-200 it became obvious that this plane was going to be a handful. As I taxied down the runway and picked up speed, control of the plane would get very touchy. I kept pushing up my speeds until I felt that I was close to flying, but I always felt I was close to losing the plane. I was very lucky to be doing my taxi work on an old bomber base that had nice wide runways. Most of the problems came after I accelerated up to my target speed and pulled the power off. I then had to compensate for the change of forces on the plane. I could feel the tailwheel skidding ineffectively, unable to overcome the plane trying to change directions. This is when things felt the worst. I always had to keep my hand on the dual brake levers to stop the plane if it decided to change directions on its own.

After about two hours of taxi time I added 100 pounds of ballast. I placed 25 pounds in the baggage area and 75 pounds in the right seat. I was hoping that this would help calm things down, but with this configuration the handling seemed to get worse. I didn't understand this until I read David Gall's report. I continued to push the taxi speeds up and one day things got real wild. I had just pulled the power back from a high-speed run and I was dancing on the pedals trying to keep things straight. I could feel the tailwheel skidding when the plane veered off about 44 degrees to the right. The tailwheel had no effect on correcting the turn and I could see the edge of the runway and the grass in front of me. I pulled hard on the left brake handle and the plane made a sudden turn to the left about 90 degrees. The plane started to skid down the runway sideways and I wondered if it would flip over sideways. I grabbed a little bit of right brake and the plane centered on the runway. Time to breathe.

I did make one change during this time. I felt the tailspring was a little weak and may have been flexing when I was getting on the pedals. So I added some additional wraps of BID to help stiffen things up.

I continued with my taxi testing and things stayed about the same. I didn't have another major excursion to the side of the runway, but I could always feel the tailwheel skidding behind me. While this was going on, I always kept my hand on the brakes after I pulled the power back.

Well, my confidence built back up and I was thinking I could fly this thing. I started looking for a calm day and on the first day of June, I made my first flight.

The landings during my first ten hours kept things pretty exciting. I still felt the tailwheel skidding behind me and I always had my hand on the dual brake levers to give them a tug if I thought the plane was getting ready to head off into the boondocks. Most of the time it only took a small nudge, but somewhere around ten hours the plane decided to take off on its own after I was back on the ground and I ended up skidding sideways down the runway again after I corrected with the brakes. Well I knew I couldn't ever leave this 150-foot wide runway if I didn't make some kind of change. And even then, my heart wasn't going to take too many more of these rides.

I talked this over with several of the guys flying their planes and got several tips on how to fix the problem.

* Cut the main wing out and decrease the angle

* Move the C.G. farther back to help weight the tail down

David Gall's article showed up in the mail and it couldn't have come at a better time. I read it over several times and felt that what he was saying made sense, and that maybe it could help me. I checked my axles and they were indeed pointing towards the ground with the plane empty and with only a few pounds of fuel.

The procedure that I used to change the wheel camber is very simple. The first thing I did was to determine how much weight I needed to add to the plane to get to my gross weight.

I next took the wheels off and set the wheel pants down on flat furniture dollies. The dollies will allow the canard to flex and the wheel pants to splay out as it does normally when you're taxiing. This also allows you to make the adjustments to the axles all at once without having to unload and reload the weight. You could probably get by with only one dolly and adjusting one wheel pant and then moving the dolly over to the other side. The only thing you need to remember is to keep your wheel pants at an equal height so you get the correct axle alignment. 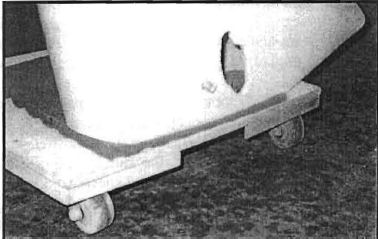 With the wheels off and the wheel pants on the dollies I weighed the plane to my gross weight. I sure am glad that they started making 60 pound bags of cement.

I made my adjustments to the outside axle hole. I used a Dremel tool with a 5/8-inch drum sander attachment. A graph chart with one-inch squares was placed on the opposite wheel pant. This helps gauge how much the axle alignment is changing as you modify the axle holes. I would sight down the axle and then make an adjustment to the axle hole until the axle sighted correctly. I made my axles sight on each other which gave me zero degrees camber at gross. I also kept about a half a degree (two inches forward) of toe out. 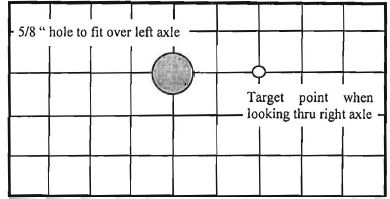 Once I had both axle holes adjusted I cut out pieces of 1/4 inch plywood in a shape to fill in the void above the axle. With the plywood in place I greased the axles and then filled in the remaining voids with the flox.

The next step is to reposition your brake calipers to match up with the new wheel alignment. If you adjust the outside axle hole this shouldn't be too hard of a job.

So how much did changing the wheel camber help me? Let me put it like this. Before I made the change I had to touch my brakes to help steer at least once during every landing I made. After the wheel camber change I haven't touched the brakes once, NOT ONCE (well, maybe to help stop). I think that was a big change.

You can order a PDF or printed copy of Q-talk #67 by using the Q-talk Back Issue Order Page.