Here are a couple of letters from Brian Martinez and some of his test flight experiences and how he resolved his carburetor problems.

First flight with Crowley prop borrowed from Gene Sheehan. Attempted to use thumb tach to verify aircraft tach rpm but batteries were run down. Preflight engine runs showed static RPM of 2450 to 2500 on aircraft tach. Executed card 4, Takeoff/Climbout, (runway 30) and noted climb at 2550 RPM and 95-100 mph/1000 fpm. Engine CHT was 400+ and EGT was 1400. Transfer pump was noisy during this flight. Acceleration and climb was much better. Could not, however, exceed 140 mph in straight and level flight. Westach Oil Pressure side of Dual Gauge failed and went negative of center ..... possibly related to RTV of sender unit on firewall. Mechanical binding of mixture lever in quadrant noted. Gene Sheehan noted that the wheel pants on this aircraft are large compared to the Lamb tires and some closeoff of the well opening may be required to reduce drag. (And wheel pant drag may be a significant thing on this aircraft.) Landing was smooth on runway 30.

Second Crowley prop checkout flight. Intended to look at top end speed again. Oil Pressure sender fix was a grounding issue due to RTV shock isolation. Normal takeoff from runway 30 with 1000 fpm climb to 8000 feet. Some light chop. Noted slightly rough sounding engine or something forward of firewall. Engine Oil Temp was 230 Deg F. Made tow plane descent and landed on 30 with only slight bounce, but moderate rudder correction due to estimated 10 knot crosswind from the left. No anomalies were noted with engine on post flight, however, three cowling screws were missing on the right side of the cowl.

Flight 8 was conducted with the PROPS INC, propeller of 58" dia. and 71 pitch. Preflight testing of the engine tachometer with a hand held Thumb Tach showed the cockpit tachometer to be reporting accurate RPM. Prior to flight, the entire carburetor heat valve assembly and hose ducting to the lower cowl air inlet was removed. The only object mounted to the Ellison TBI was the air box ... fully open at the front. Manifold Pressure observed for the mission were as follows:

Maximum airspeed did not exceed 130 MPH IAS in level flight (similar to first three flights). Manifold Pressure was observed to decrease for the constant power setting with increasing attitude. The engine operated smoothly and engine oil temperature stayed at about 220-230 degrees.

There was no great improvement noted in pitch attitude nature due to the approximately 3% decrease in aft wing area. Takeoff and landings were a replay of previous flights. Takeoff was made from runway 08 and four approaches were made to runway 30 culminating in a landing. My first attempt at landing was abortive due to the pilot's failure to achieve proper speed control. This first attempt led to a divergent bounce and the pilot elected to go around. Wind conditions were calm.

RECOMMENDATIONS: Continued operation of this Q-200 aircraft with the present Ellison Throttle Body Injector installed is in question.

(1) The first three flights established that the Ellison could not be operated to a full throttle lever position due to non-optimal atomization characteristics when installed on the O-200 causing rough running and loss of peak RPM. Ellison has not been very enlightening on the subject of TBI shortcomings.

(2) We are now establishing that there is a manifold pressure loss outside of any detrimental effect of Carb Heat/Induction plumbing and with the air plenum essentially open to the entire cowl volume. Comparison of engine performance with a Marvel Schebler carb is necessary at this time.

Notes: In separate phone discussions, Norm Howell and Bob Waldmiller were in agreement that the indications are that the engine is short an inch or two of manifold pressure. This would be a good accounting for a significant part of the 60 MPH of performance, which I appear to be missing. This is a good validation of having a manifold pressure gauge for engine trouble shooting, even when a constant speed prop is not available. It may be interesting to talk to John Sharp about what it will cost to have my Marvel Schebler carb overhauled "Betcha that would be a good data point". On a possibly related note: Klaus mentioned to me last summer that the Ellison TBI was problematic and potentially dangerous even though he uses it on his Vari-Eze, and Mike Melville recently switched to a Airflow Performance fuel injection system. So, how does Sheehan make this installation work? Has anyone else got an Ellison TBI working on a Q200? Maybe it's still the prop? Maybe it's me?

Well folks, here is a brief summation of where I stand with my performance problems.

When I first started conceptualizing the engine installation, there was a lot of positive press in the magazines concerning the Ellison Throttle Body Injector (TBI). The TBI was a very nicely made component, lighter, smaller, simpler and supposedly more efficient. Little did I know what I would experience in 1995 after completing the assembly of my Q-200.

As I told you before, engine reading for flight with the Ellison TBI installed were as follows:

Prior to liftoff the RPM would roll back from the 2300 static maximum to 2250 and remain thereabouts during flight.

During the 1995 Christmas holiday season, I removed the Ellison TBI and replaced it with the standard Marvel Schebler carburetor for a one to one comparison under static conditions. The prop remained the Props Inc. type used previously. The results are as follows:

During the past year, my aircraft has served as a Ellison TBI test bed. This was not my intention. My Ellison TBI in good condition is currently for sale. (See Ad.) As soon as the Marvel Schebler installation is complete we will see what the new performance looks like in flight. Go Ahead Norm Howell, hit me with that cold water again ... I love my airplane ... I hate my airplane. And somewhere out there in the mist the voice of Jim Masal calls out ... "see I told you to just keep it simple". 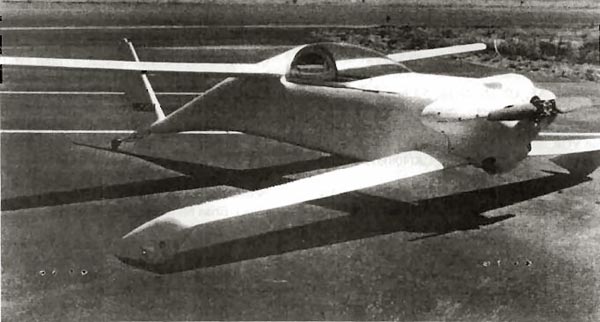 You can order a PDF or printed copy of Q-talk #56 by using the Q-talk Back Issue Order Page.