I was Bored at AirVenture! 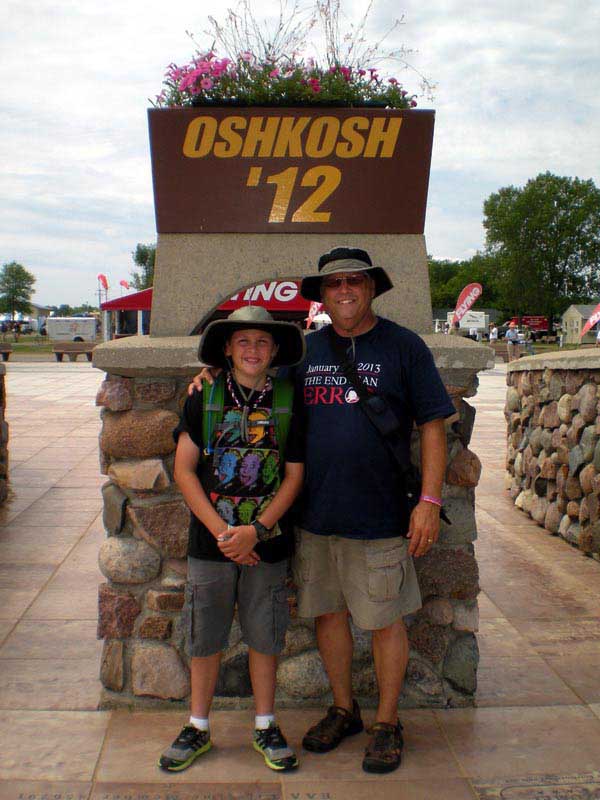 I was! I just didn’t see anything that excited me. Maybe I didn’t look hard enough. Yes, I had fun, but it just seems the economy has put the boredom factor into my annual trip to Oshkosh. It seemed like the “BIG” news this year was that yet another RV was born (the RV 14 which is an oversized RV 7). This may be exciting news for some, but not for me. 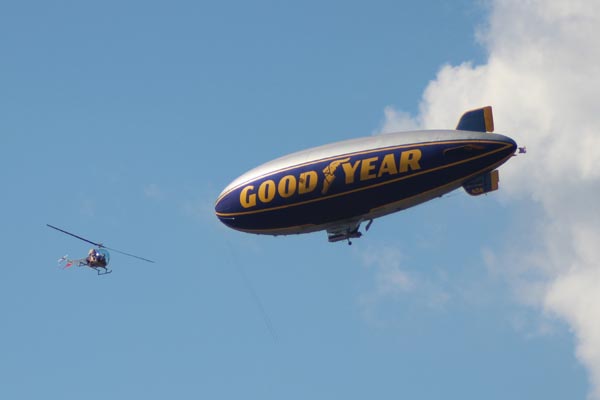 As I approached the flight line, the first thing I saw, where rows of airplanes used to be, was a long row of air conditioned corporate suites. Come on now! I couldn’t tell if they were being used or not, I just knew me and my buddies couldn’t afford to go in. With the extreme heat this year, A/C on the flight line would have been nice too. I did see Chinese flags flying outside of one. This makes total sense to me, as the Chinese seem to be buying up more American aviation companies than I would like to admit. I also heard a rumor that a tour bus company had rented one so that their tour clients could sit in comfort for the daily shows.

Now, I know AirVenture needs corporate sponsors and a place to entertain their customers, but this just stunk of in your face “you can’t afford this, so don’t ask.” The “grass roots” aviation guy has to find a shade tree for his A/C. And the airplanes the grass root guys built are shuttled off to who knows where. 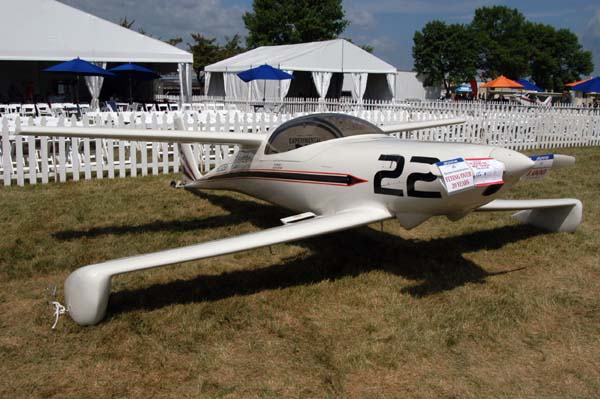 Speaking of shade trees, for years I have been filling out my evaluation email from EAA by asking for more trees to be planted for shade. About a month before this year’s AirVenture started, I get an email from EAA indicating they found a way for my idea to take shape. I was excited until I read further to discover what their solution was; I could donate money toward a tree for the AirVenture grounds! Geeze! I guess the $24 per day for the privilege to camp in a field just isn’t enough. Surely they could take a dime or two from the $28.00 meal my son & I had at the show for a tree in my name. (We had 2 burgers, 2 bags of chips, & 2 bottles of water. Not exactly what I would call a gourmet meal.)

Do I sound grumpy? I seem grumpy. Maybe it’s because I don’t have a flying airplane. Maybe it’s the price of Av gas, but I guess I’m grumpy. 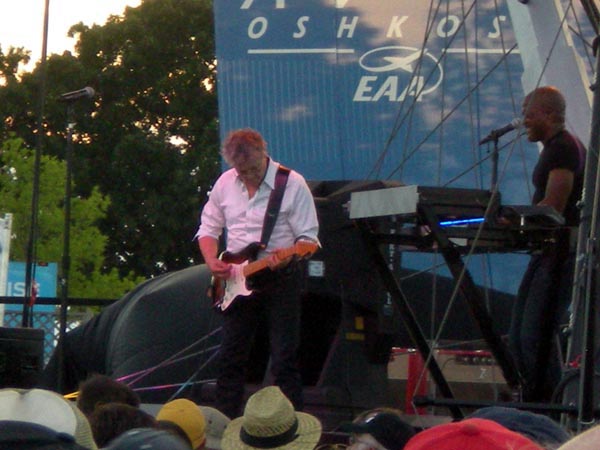 I did attend the Steve Miller Band concert on Monday night. That made me smile as it harkened back to my younger years. I tried not to think about what it says about my age.

I did not stay for the night air show on Saturday, but I did have two independent friends on Facebook say it was worth watching. Here is a link to a YouTube summary of it: http://www.youtube.com/embed/NmNps7-4Yv4

I guess EAA was pleased with the turnout of over 500,000 attendees, but I found shelter during a bad storm that blew in on Wed. in building “C” because it was only half full with vendors. I have never seen that before! It seems to me that 800,000 attendees used to be the norm not too long ago. 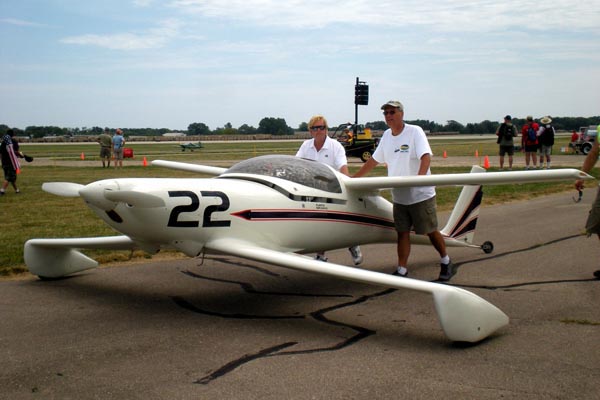 Sam Hoskins and Bruce Crain are the only known pilots that flew their Quickies to the big show. Sam flew his race at a blistering 218 mph. I wonder what that’s like? Way to go Sam!

On Thursday morning we had a nice turnout for the Quickie “Type Club” meeting with 15 in attendance. Mike Bergen took notes of the meeting and they follow my words of grumpiness. 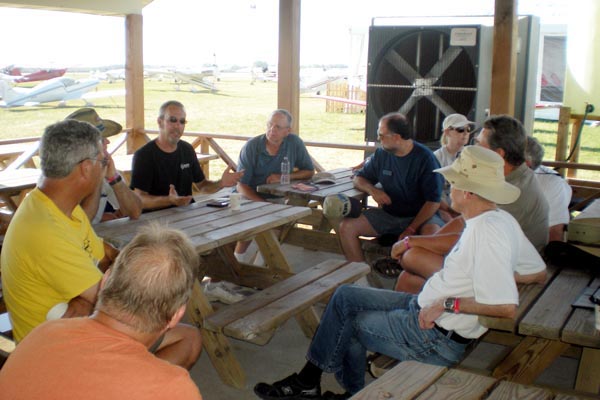 Let’s face it, I’ll be back at AirVenture again next year. I anticipate the event like it was Christmas in July. It’s a time to bond with my son who now goes with me every year. It’s where I see my aviation friends once a year. I just received my Annual AirVenture Survey email as I was typing this. I might as well fill it out while I’m still grumpy! 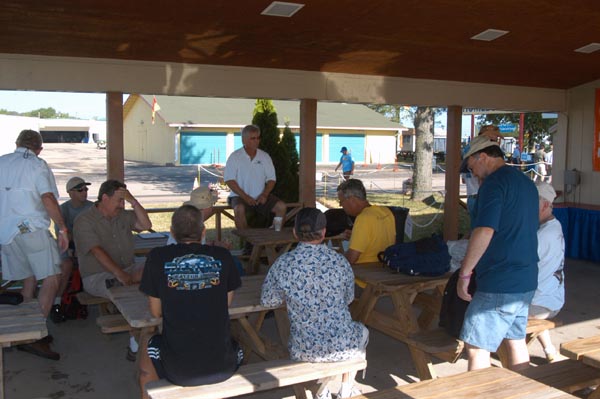 0855 – 0920
The discussions centered on first flights first ten hours and safety. Certainly the data shows this to be the highest accident rate.

Richard Kaczmarek and Sam Hoskins contributed most focusing on Jerry and Bud Starnes crashes. What happened; possibly pilot proficiency, cockpit ergonomics, or poor construction? Sam places part of the blame on QAC as the plans are very poor and leaves a lot of room for customization and alterations. However there is no excuse for any of this with the available support. 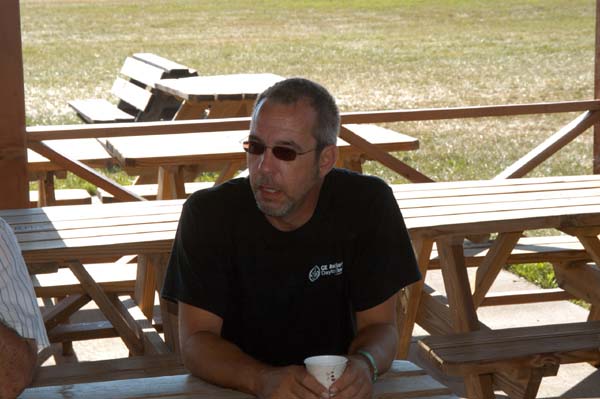 Richard spoke of the team they have assembled with interest in revising the design. They are redesigning and have modified a Q2/Q200 fuselage to four inches wider and six inches longer. They are also redesigning the Tri-Q main gear using Pro Set epoxy with a post cure at 250F to address the current issues associated with solar heating. They will be using the LS-1 foil for the canard. They went as far as building a prototype and tested it to destruction by dropping it from 20 feet. A Sikorsky engineer has been supporting the effort. They are in discussions to offer the Q-Mod as a kit.

With the current development efforts they are evaluating the Whitman style (tubular) gear [found on Christian Eagles and Pitts]. The developments include increasing the spans of the wings.

They are also working with modifications to the Q-1. Nate, the engineer, has a passion for the Quickies and has been toying with a tandem modification for it.

They have made tooling and are also making the LS-1 carbon spar. It has been tested to validate the laminate schedule and the structural integrity. They are confident that they have achieved the properties of the original design.

They are working with Steve James at Eureka for precise cutting of the foam cores as they have abandoned the notion of molds for the flying surfaces.

The group [or team] consists of about 14 Quickie and Dragonfly builders with an active interest in these developments.

0920-End
Talk changed to a general discussion on current status of all Quickies. There was some interest in the disposition of all to include the un-built kits and where they would be. Of note was the Quickie in a tree in Kentucky. The pilot landed the plane, tied it down and left.

By the time he returned he discovered that a wind had lifted the plane and lodged it in a tree. The aircraft is still there to this day with the branches having grown around it.

Dave Gall had purchased some Q stuff and came across photos of Scott Swings original Tri-Q. He has donated them to the QBA. 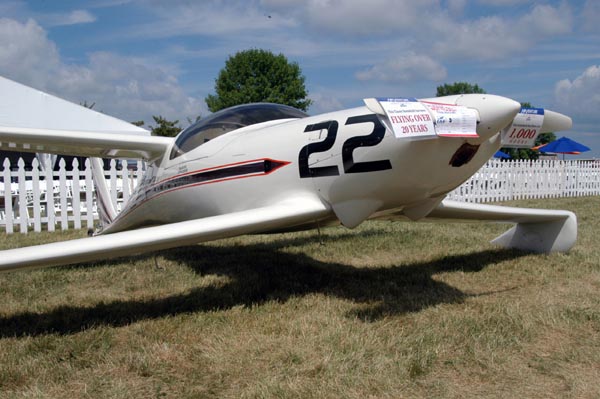 Sam had an issue with his “turn buckle” style of aileron control as it would reverse adjustment in use. Mike Bergen offered a sample of Vibra-Tite, ND Industries, to evaluate. Mike will send him the sample upon return and Sam will report his findings.

It was noted that there was about 6750 collective flight time hours in Q-Birds sitting around that morning. This is encouraging to those of us who are still building. 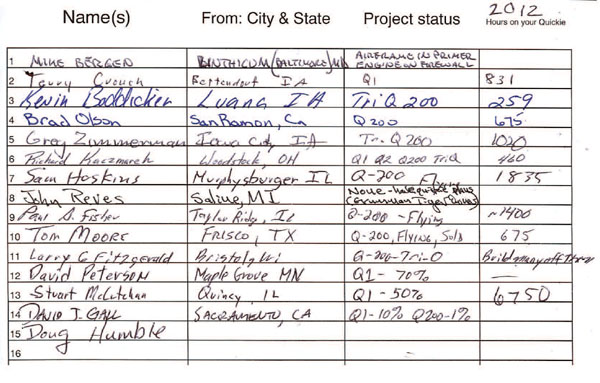 [Editor's Note: Sanjay Dhall sent me the following photos from Oshkosh. . . Just so nobody thinks that Sam and Bruce were the only Q-birds that showed up! LOL!] 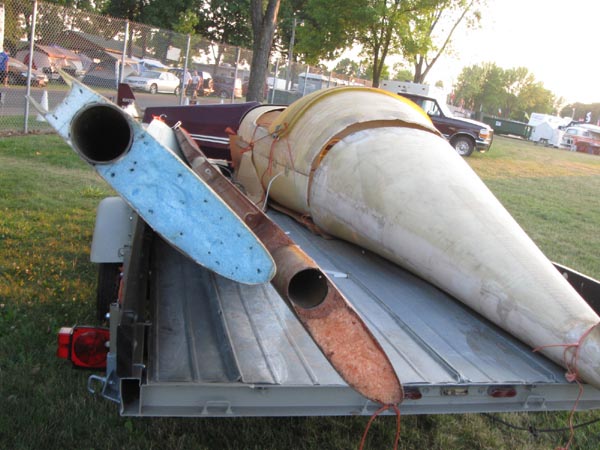 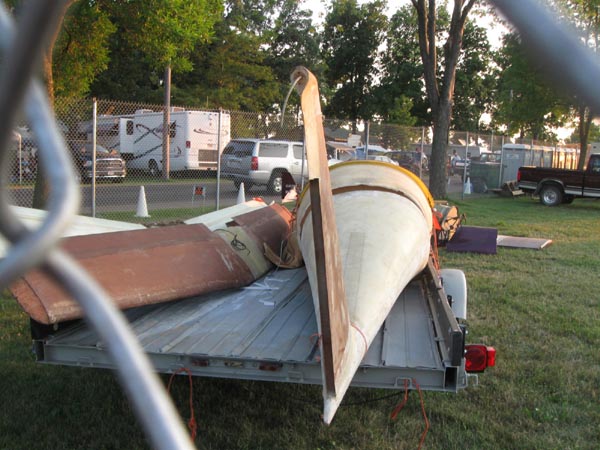 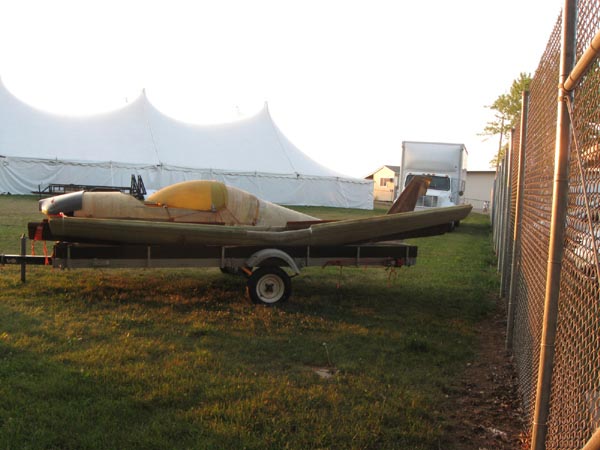