Belly Board mod that rewards you with yet another GUARANTEED  .003 mph speed gain.

[EDITOR'S NOTE: This article is another "speed mod" provided by Jerry Marstall. You can read about more of his work in Issue 166. Thanks again Jerry!]

I have never liked this implementation for the following reasons:

Hinging the belly board at the front for a rear opening addresses all of these concerns.

While it has always a concerned to me, I confess that it wasn’t enough of a concern to cause me to do anything about it over the 17 years my Q has been flying.

It wasn’t until the 2014 Sun N Fun Q-form when Richard Kaczmarek of Fast Little Airplanes fame showed up and mentioned he had turned his board around to hinge at the front. That peeked my interest.  I thought, this should be simple enough.  I’ll simply turn the belly board around and somehow attach it to the front of the belly board cavity.

Here is what I did.  I’ll address the easy step first - relocation of the hinge; turning the belly board around 180 degrees.

2.  Make a paper pattern of the hinge side that is opposite the belly board.  Make the pattern the exact size of the hinge leg and mark the center of each mounting hole.  Put it aside.  More on this later.

4.  A length of 1”x 1” aluminum angle is used to reattach the free side of the belly board piano hinge to the fuselage.  I used a hand-held hack saw blade to scratch out a slot in the foam the thickness of the aluminum leg (1/8”) between the bottom fiberglass skin of the fuselage and the foam that forms the fuselage shell.  This slot runs the length of the cavity and is parallel to the bottom fuselage skin.  The slot recedes enough to receive the base leg of the “L” of the aluminum angle. 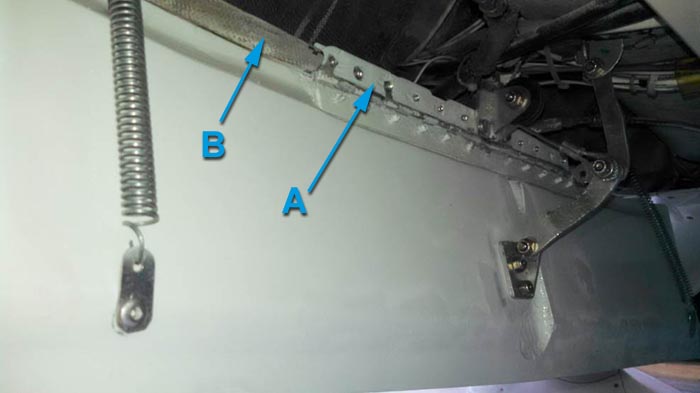 6.  When satisfied with the fit, secure the belly board in the up position (good ol’ duct tape).  Retrieve the hinge template that you made in step 2.  Align the template with the hinge and tape it to the bottom of the fuselage.  Drill the 1/8” holes for the pull rivets through the template, bottom of the fuselage and horizontal leg of the aluminum angle.  If you want to countersink the pop rivet heads, now is the time to do it.   Then from the underside, pop rivet the horizontal leg of the aluminum angle to the bottom skin of the fuselage.  You now have a belly board that opens to the rear.

7.  The next challenge is to fabricate the mechanism to open and close the belly board. The problem is space.  There is only 1.5” between the bottom of the main gear bow and the top surface of the belly board when it is closed.  In this small space needs to be a mechanism that can force the belly board out into the wind stream at some predetermined angle.  I chose 80-degrees which required the trailing edge of the belly board to open 8.5”. I finally settled on a scissor styled mechanism. 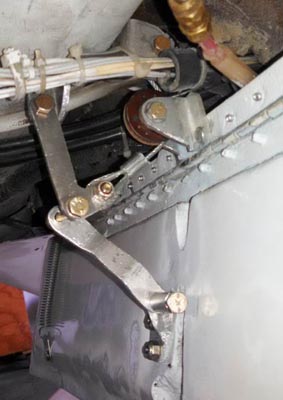 I strongly suggest fabricating the initial mechanism components out of a material other than aluminum, such as 1/8” plastic, because you will probably make more than one before getting the geometry right.   Since I am not an engineer, there were no fancy formulas for me – lots of do and redo.

The final two scissor arms are constructed from 1/8” aluminum and are each approximately 3” long.

Since I chose to retain my actuation cable, I already had one pulley mounted in front of the landing gear bow.  In order to get a straight, horizontal pull on the scissors, it was necessary to mount another pulley beneath the original pulley. 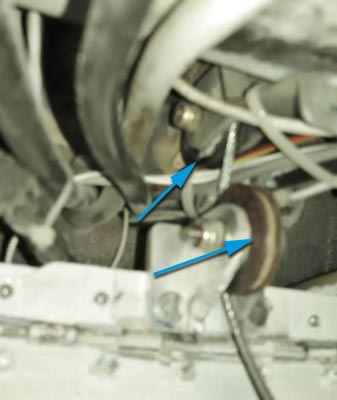 You guys with conventional gear will probably need a different solution.  A way of testing your mechanism design is to hold the belly board up with your hand and attempt to deploy it with your actuation control handle.  If the belly board cannot be forced down, your geometry needs modification to gain the appropriate power advantage. 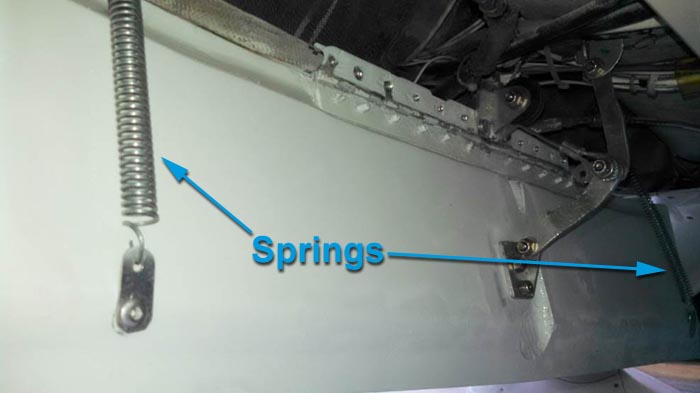 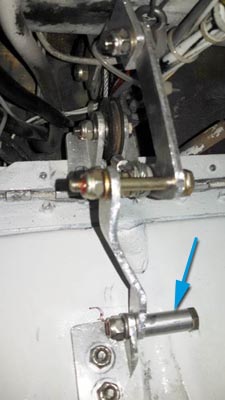 Flight Test:  When I first deployed the belly board, the nose quickly pitched up about 5-deg.  The original board was a scoop which pulled the nose down, now it seems to work as a lifting surface.  I simply push it over, allowing me to point the nose down for a good view of the runway.

No more fumes, better runway view, less drag and if the mechanism malfunctions, it will fail to the closed position.  Why didn’t I do this years ago? Thanks for the push Richard.